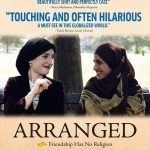 I was in the mood to kill some brain cells the other night and waste two hours of my life, so instead of getting drunk by myself to wash the pain of my life away I went to Hulu to try in vain to find a movie worth watching. Hulu is home to all the movies that came out between 1981 and 2005 that you have never heard of. The movies on Hulu are so bad that the top viewed movies are Lifetime originals, so I tried in vain until I came up with Arranged, which I only agreed to watch because it was about orthodox Jews – even though I knew from the start that any movie about Jews usually gets it all wrong – especially when it’s about orthodox Jews.

Arranged is about two girls going through the motions of trying to find a mate. There is Rochel who is frum and being set up through her shadchan and there is the Muslim chick I forget her name who’s father brings home perspective matches for dinner. These two girls are teachers at a public school, Rochel is a special ed teacher and the Muslim chick is teaching 4th grade – they become friends based on their outsider status amongst the other teachers who sit and talk about sleeping with random guys and getting drunk and the other “normal” things that the movie director tries to shy that these religious folks feel uncomfortable around.

Remember that I, having seen lots of movies portraying orthodox Jews with clip on peyos drinking manichewitz thought they did a pretty good job with the women of the movie. Then men are a completely different story, Rochel has a good accent and the dress is down pat, her mother and mothers friends are overbearing frummies with snoods and shabbos robes, her father looks like he was taken out of the movie Wall Street and told to put on a black yarmulke, he’s terrible in the frum department, her younger brother looks like a modern orthodox kid who wears one of those velvet yarmulkes with a ring around the side.

The movie is great in that it shows the real pain of a 22 year old single frum girl who is considered old, she goes out on an endless stream of dates with totally whacked out dudes and the shadchan just keeps saying she’s picky because she doesn’t like any of these terrible dudes. The story tries to pack a lot into it, for us Jews we are concentrating on the shidduch and frum aspect to it, but the general population is made to think that the main point of the story is the Muslim-Jewish part, yes they become friends and have that awkward point where they hang out in each others homes and the parents don’t approve.

In her angst of not meeting the right guy, Rochel runs off to Williamsburg or something to find her long lost off the derech cousin to talk about her situation, the cousin takes her to a party and she sips a cocktail and some guy forces her to dance with him – this scene reminded me of the movie Mendy (if you’re interested in the Ex-Chassidim you need to watch it)

Ok I’m not going to ruin the movie, but lets just say they did a very good job with the ladies of the movie, but the men all appear to be out of some 1960-70’s documentary about Yeshiva University or something.

← Why are you still frum?
I hate body wash →

34 comments for “Arranged: Movie about shidduch dating on Hulu”