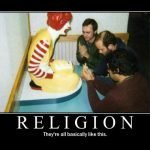 This may be one of the most common questions I get asked from people who read my blog and I really don’t understand it much. The question is usually prefaced with “after all the crap you’ve seen or been through” followed by some sort of diatribe on why they left the path and wondering why I haven’t done the same. The real answer without going into crazy detail is because I believe that God said so.

It just so happens to be that I haven’t really been through more or seen more crap than anyone else who grew up in or is involved with the orthodox community, I just have a skill in pointing it out, making fun of it and exposing our flaws for all to see, but I still wonder why that would make me leave my religion. I have met and spoken to all kinds of Jews and the Jew-curious and almost every off the derech person knows of me and many have been in contact with me – they have many stories and reasons, most of which I cannot relate to. I have no idea what my reaction to orthodoxy would be if my rebbe had raped in cheder, or if my parents were overbearing and strict, or if I had judged my religion based on the people practicing it – which I don’t.

So why are you still frum?

It is a question my friends and I toy around with constantly, there are dozens of reasons and justifications that leave out the main point of it all – because obviously – beyond our skepticism, cynicism and sarcasm, we actually believe in the darned thing called Judaism.

The Rabbi in San Jose a few weeks ago spoke about all the justifications we make for doing things that the Torah told us to do and in the end, no matter how much you try to make sense of something, everything is done because God said so and I totally believe in that, regardless of the fact I am not good at doing them all and that I make fun of them and think the whole thing is insane.

Of course there are other everyday reasons why I and so many of you adhere to this irrational thing called religion. Guilt is a major factor, but guilt is so God, we think that God is going to smite us, strike us down with lightning after eating that cheeseburger or missing morning seder – so guilt is just a faction of God – at least for me it is because I don’t have anyone telling me what to do or an image to uphold, the whole religion thing is in my own hands.

Social reasons is another major factor at why we do things, but my theory is that if you felt strongly enough about something you would be willing to give up your former life to come out of the closet and stand for what you think is right, right? Well maybe not, since I have spoken with tons of people who are “happily” married and part of frum communities and can’t imagine giving the community up even though they don’t believe – I guess they can now understand why gay folks come out of the closet.

I remember in high school when non-Jews would ask me why I was a religious Jew and my answer was because I grew up with it and how that really made me feel like crap because it was true, there is no way I really believed in any of this stuff in high school – I hadn’t developed my belief system yet, did anyone?

37 comments for “Why are you still frum?”