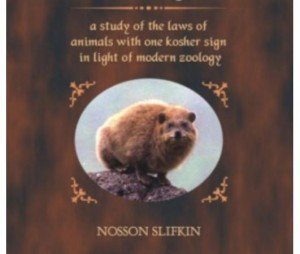 To put it bluntly, one might have described me as a big nerd when I was an adolescent, and not just because I thought it was cool to have green-tinted eyeglasses (yes, I repeat — green-tinted eyeglasses).  I can say that most of the boys my age, both at school and at home, were very interested in professional sports and they reviewed the stats as though they needed to be perpetually ready for a pop quiz.  Me — well, I liked animals.

Instead of baseball cards, I collected animal cards, and instead of being able to ramble off the starting line-ups of the Knicks or the Bulls, I was able to list 15 marsupials.  At least I knew who the Bulls were, though — too many of my friends didn’t know what marsupials were (Ha!  What a bunch of losers!!)  But alas, I digress.

I begin as I did in order to explain why it is that Shmini has always been my most favorite of the weekly Torah portion — you gotta love it when God starts discussing ungulates.

And even today, as a professional dentist and a freelance zoologist, it amazes me to see the Torah discuss anatomy and physiology; in case you are having trouble understanding my awe, consider the  analogy of my friend who can’t seem to get over finding a biblical verse expounding upon the triple-double.

Which brings us to the very prickly subject of ma’aleh geira.  “What is ma’aleh geira?” you might ask, and you might be told that it refers to an animal that chews its cud.  That’s what I was always heard when I was growing up — but, suddenly, as if my personal development was occurring in tandem with the development of the universe (ever have that feeling?), R’ Slifkin comes out with his The Camel, The Hyrax and The Hare — it’s just so startling to me that it appears as though no one has ever thought to ask if rabbits and hares ruminate, and if they don’t, then what is Leviticus 11:5-6 talking about?

While I did get to borrow this book and read it about 3 years ago, I don’t own a copy and I’m going to wait until I can get one for less than $170 on Amazon.  But suffice it to say that this is a tremendously fascinating topic, a summary of which can be found here.

Now, I’m certain that some people are going to attempt to hurl expletives at me in the form of “you Slifkin-heretic, you.”  To which I will respond…well, let’s wait for that to happen, shall we?