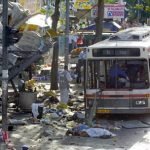 “So what are people saying over there?”

That’s the question my father often asks me on our way home from the airport in Texas.  ”So what do people think about what’s going on…..about Prime Minister Netanyahu…..about the revolution in Egypt?”

With the task of representing of the entire state of Israel on my shoulders, I usually respond with….”I don’t know.”   Profound indeed.   Without a TV (or stellar enough Hebrew to understand the local news were I to own one), I get the majority of my news from the same media outlets that my friends in America can:  Jerusalem Post, Ynet, Haaretz, and whatever link somebody may have posted to Facebook on any given day.

Not to mention that, not surprisingly, the majority of people I associate with are Americans or Anglos (people from English-speaking countries, as we call them.)  I wouldn’t say that I live in the “American bubble” but when you consider how much time many of us in the English-speaking world over here interact on Facebook and Twitter, there’s a whole lotta English content goin’ on.

Sometime this afternoon, I Skyped my friend Margo in Texas.  Her son, and my friend, Ben just made aliyah about two months ago.  Before I could even say hello, she told me that she was watching the news of an explosion in Jerusalem.

During the intifada of 2000-2003, I often started my day by checking the news online for fear that another pigua (terrorist attack) had taken place.  As Israelis describe it, they measured the severity by how many people died.  ”Only three casualties?  A small one.”  Twisted, yes.  Understandable?  Probably.  The last few years, especially since I moved here in August of 2006, have been quiet.  Not a single bus bombing in Israel and only a few isolated incidents in Jerusalem:  the gruesome yeshiva shooting and two tractor incidents.  Even though some people abroad have a static mental image of Israel as the “war zone with camels”, it’s far from accurate:  things have ebbed and flowed.  I “missed out” on the worst of it in 2001 and 2002 when bombs were going off every week and people were afraid to leave their apartments.  That just isn’t the Israel I live in.

So when Margo told me that a bombing took place in Jerusalem….while I found myself physically in Jerusalem at the time….it was shockingly unexpected.  To live here at a time when piguim are happening…that I might have to think about living in a place where things EXPLODE…..that’s not the Israel I’ve experienced.

Well…it didn’t feel like anything.  Or more accurately, it didn’t feel so different from how I remember in the States.  I have passed the Binyanei Hauma convention center, where the bomb blew up, approximately 45.3 bajillion times.  I can picture it well, yet I can’t seem to create the mental image in my mind matching the one I see on the news of a bomb, ambulances, police, and bloodshed.  And even though I know somewhere between a couple of hundred and 45.3 bajillion people in Jerusalem, I’m unable to conjure up an image of anyone I know possibly being near that bus.  I might as well be back in the States, half a world away, when the tragedies happened to faces I didn’t recognize with names I didn’t know.  This is a small country but if G-d forbid (tfu tfu tfu) I hear a familiar name in the future, some kind of protective mental wall erected in my head would probably be broken down forever.

Once Margo broke the news to me, my inability to reach my friend Mijal on the phone just a few minutes earlier suddenly made sense.  The cell phone lines were all clogged with traffic.  Welcome to the first big pigua of the Twitter age.  Whereas the old days reportedly brought minutes of trying to get updates which felt like hours, scrambling to reach friends and loved ones on the phone, the Anglo community this time was Tweeting within seconds whatever information came in:  where….what….how many….and most importantly, “I’m fine.”  Even if I wanted to call my family to let them know I was ok, I’m not sure I would have been able to get through from my cell phone.  Let’s all please agree that in 2011, Facebook, Twitter, email, and any online communication are the best way to be in touch with loved ones.  A few friends texted me to check my whereabouts; I didn’t get them till after we had already been in touch online.  (If you want to search for the hashtag in your favorite Twitter application, the hashtag is #JlmBomb .)

As a friend told me later on the phone, “mazal tov, it’s your first one.”  Perhaps you have to be here to understand the tone.  Yes, to say “mazal tov” is jokingly sarcastic.  But it’s not mean-spirited sarcasm.  And it wasn’t overflowing with cynicism either.  If either of us were greatly affected, perhaps it wouldn’t have been said.  But being on the other side of town, maybe a 20 minute bus ride, feels almost as far away to me as being in the States, except that I happen to know a lot more people who live here.  There’s a disconnect.  I sat there watching the news thinking, “what am I supposed to feel now?”  What can I do?  It is what it is.

And you know what?  Tomorrow people will wake up, go to work, follow the news, and more or less lead the same lives they led today.  What can we do?  I’ve seen a few Tweets and Facebook posts hoping that this isn’t a sign of things to come, praying that we’re not returning to the crazy days of the intifada, noting that this isn’t in a vacuum but following too-little-reported rocket attacks from Gaza and the killings in Itamar.  Only time will tell if I am 150% wrong but if I’ve learned anything from being here, it’s that (bleep) happens and there is no way anyone on this planet can predict whether a stone thrown in the Middle East is a match thrown into a tank of gas, or just a stone.  We’re all hoping it’s the latter.

“So what are people saying over there?”

People ask because I live here; my answer should carry more weight. I sometimes wish I had something more meaningful to say.  You know what people are saying over here?

May G-d protect and heal those hurt in today’s attack.

← Why do purim shpiels suck so much?
How to Spot FFB’s →

5 comments for “Jerusalem Bombing: “So what are people saying over there?””