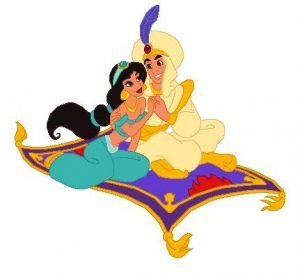 R’ Daniel Z. Feldman tells a story about Disney’s Aladdin being shown at NCSY Kollel once upon a time around Purim, and here’s the Dvar Torah that was told at the time:

The Talmud (Chullin 139b) queries if there are any references to Purim in the Torah.  “Haman min haTorah minayin” (“Where in the Torah does it mention Haman?”) it asks, and it answers, “Hamin ha’eitz asher tzivisicha l’vilti achal mimenu achalta” (Genesis 3:11 — “Did you eat from the tree from which I commanded you to not eat?”)

But is this just a word game, or is the Talmud trying to teach a deeper meaning?  So the play on the words “Haman” and “hamin” can be explained as follows: despite the fact that Haman was viceroy over 127 nations and he received tremendous honor from this position (Esther 3:1-2), his mentality was such that all the glory meant nothing to him when he considered the singular defiance of Mordechai (5:13).  Similarly, the Torah speaks of how Adam and Eve were alone in the Garden of Eden, with all its bounty under their command — yet this ultimately did not suffice, for the psychological burden of there being even a single tree in the garden from which they did not have permission to eat was too great to handle.

The Talmud continues on, explaining a reference to Esther herself: “Esther min haTorah minayin” (“Where in the Torah does it mention Esther?”) it asks, and it answers, “Va’anochi hasteir astir panai bayom hahu ” (Deuteronomy 31:18 — “And I will hide my face on that day.”)

But surely this, too, is not just a word game — what is the deeper message here?  The play on the words “Esther” and “astir” (hidden) can be explained as follows: although the Book of Esther may appear to be a well crafted tale of royal intrigue, scheming abuse of power and the most magnificently suspenseful topsy turviness ever told, Jewish tradition maintains that, like most everything else, God was present all along, pulling the strings and running the show from behind the scenes.

So, as the NCSY story goes, perhaps a hint to Aladdin can also be found in the Torah?  Well, the Jerusalem Talmud speaks of a blessing that used to be recited by a beis din (rabbinical court) upon convening, but it does not mention the text of the blessing.  Most likely, though, the blessing followed the traditional parlance of “…asher kiddishanu b’mitzvosav v’tzivanu al hadin” (“…that He sanctified us with his commandments and commanded us regarding [the laws of] justice).

But as you’ve probably figured out already, it can’t just be a play on words — it’s got to have a deeper meaning, a life lesson, a take-home message.  So we can ask: why is there a blessing on din?

This question can arise because there are quite a number of commandments for which there is no blessing, and there are numerous reasons given as to why these commandment are not preceded by a blessing.  R’ Naftali Zvi Yehuda Berlin tried by explained that commandments that exist within the context of blessings, such as the recitation of the Shema, Grace after Meals and the Priestly Blessing, are not preceded by a blessing of their own.  There is also an idea put forth that blessings are not recited on commandments that possess no finite limits to their observance, easily applying to discussing the Exodus from Egypt during the Passover seder and honoring one’s parents.  A third suggestion is that blessings precede only commandments between man and God (bein adam l’makom) but not man and man (bein adam l’chaveiro).

A fourth rationale, and the one most relevant here, given for the distinction between those commandments that are preceded by a blessing and those that are not relate to the uniqueness of the commandment to Judaism — if the obligation or practice applies to gentiles as well, no blessing precedes the commandment.  So the question arises why there is a blessing on the assembling of a court, when gentiles are similarly bidden to formulate civil legislation and mete out justice accordingly.

In Disney’s Aladdin, Jasmine falls in love with Aladdin but is in despair because she is a princess and must marry a prince, while Aladdin is but a street urchin and a common thief, albeit perhaps sweet, noble and generous.  What she doesn’t realize, though, is that it is not the chitzonius (external qualities) but the p’nimius (internal attributes) that defines one’s character.   At the end of the film, Jasmine marries Aladdin because it is his intrinsic “prince-keit” that is consequential, rather than his superficial lack of royal lineage.

Similarly, even though gentiles possess a divine obligation to execute justice, and it may superficially appear identical to the obligation incumbent on Jews, it is not.  At first blush, it may appear that the obligation to hold court for Jews and gentiles is the same, and so there should be no blessing according to the fourth rationale, but Judaism maintains that the bulk of its major laws are divinely inspired, while equally maintaining that any divine inspiration related to gentile laws find their source in Judaism — so even though the two may appear similar on the surface, the mandate to keep rabbinic courts is intrinsically unique, and a blessing is therefore apropos.

← Drinking on purim helps with kavannah during davening
Purim II →