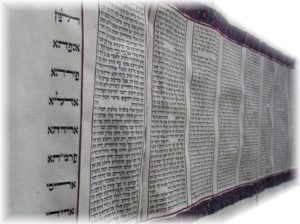 The Megillah tells of the ultimate peril facing the Jewish nation under the directives put in place by Haman (Esther 3:8-11).  Mordechai strongly urges Esther to beseech the king (4:8) in an attempt to save the Jews, and Esther obliges wholeheartedly (4-16-17).

The Midrash Shochar Tov relates that Esther cried out, “Keli Keli lamah azavtani” (Psalms 22:2 — My God, my God, why have you forsaken me?) — comparing herself to the biblical Sarah who had been abducted by Pharaoh (Genesis 12:15), Esther pleaded for God to save her in a similar fashion from King Achashverosh.  But the particular name of God she invoked, Kel, is known for being the divine name of justice (din).  Would Esther not do better using the name of God reserved for mercy (rachamim)?

A few weeks ago, in Ki Sisa, we saw the Israelites faced with magnificent peril, with God threatening to destroy the entire nation following the incident of the golden calf (Exodus 32:10).  Moses prays to God and averts the danger, but in similar fashion to Esther, Moses invokes the particular name of God specific for justice, “Hashem Hashem Kel Rachum V’Chanun…” (34:6) — why include that name at all?

R’ Betzalel Rudinsky explains that Moses was not at all in danger after the golden calf; He was not clearly part of the sin, and, in fact, God offered to forge an entirely new nation from Moses while destroying the rest of the Israelites!  Moses responds to God that He must forgive the nation, and if He refuses, Moses offers to have himself destroyed along with the entire nation (Exodus 32:32).  In light of Moses putting himself on the line when he was initially free from punishment, the divine attribute of justice necessarily dictated that the nation be saved — and so Moses did not hesitate to use it in prayer.

So too, explains R’ Rudinsky, Esther was not in danger from Haman’s decrees; her heritage was concealed and no one in the castle would ever be the wiser.  But because she exposed herself in her attempt to overturn Haman’s plans (Esther 7:3-4), putting herself in danger lest the King not grant her request, the merit of her surrender transformed the attribute of justice into one of mercy — in response to her self-sacrifice, justice necessitated that her prayers be accepted in a merciful way, and so she did not hesitate to call upon God in this particular fashion.

← Purim I
Laws of Tznius for Our Degenerate Age →