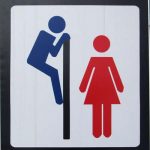 Fellow bloggers Dov Bear and Eliyahu Fink have been tweeting and blogging about some strange or over the top frum beliefs out there and I guess they want me to enter the mix of things. My facebook status update received 73 comments of people trying to kill each other for me suggesting that things certian poskim have told us to do are strange and the funny part of it is the entire religion is strange and quite frankly, religion in general is strange, but we do it because we were brainwashed y our local community kiruv kollel, are convinced we will be damned to gehenom if we don’t, grew up with it or married into it. So what are the strangest frum beliefs, practices and superstitions?

The halachic way to wipe your butt

That water needs a hechsher

That the Lubavitcher Rebbe is still alive and is moshiach

Toiveling dishes and utensils in the mikvah

Transferring sins to an animal and than killing it

Using a slotted spoon for coleslaw on shabbos is considered work

Not putting food under ones bed

Not sleeping with your head to the door

Not touching your eyes in the morning

Rabbis not believing in science

That Reform and Conservative Jews are less Jewish

Refusing to eat fish and meat together for health reasons

Drinking bottled water on pesach, because back in the shtetl days the goyim would put bread down the well

Eruv – because putting up a string makes those 400,000 daily people passing through your neighborhood into a private domain

Violence against women in the name of tznius

If you have a court case against a non-Jew and it takes place during the Jewish month Addar, the Jew will win.
[-ReMa in Shulchan Arukh O.C.]

My bubbie always told me that women should eat the heel of a challa loaf because its pointed edge represents the male anatomy (!), and the woman eating this part of the challa would thus bear male children. No joke!

Another “absurdity” mentioned is the consumption of sliced onions left overnight.
Some thoughts about the above.
One principle discussed in Cha’zal, is “chamira sakanta me’isura” – laws regarding danger are more stringent than those regarding prohibition— make food safety a primary consideration.
here is a disagreement among later Poskim about this question and other details of the prohibition. The following is a summary of these views:
The Gemara (Niddah, 17a), notes that a person who eats shelled eggs, peeled onions or garlic that had been left overnight, endangers his life and will be judged as a person who took his own life. The Gemara explains that the danger associated with these foods is ruach ra’ah.
Yad Meir and Shevet HaLevi hold that this halacha is no longer relevant because Tosfos states that certain ruach ra’ah do not descend in “these countries”. We can infer from Tosfos that we do not have to be concerned for any ruach ra’ah unless we have a mesorah that that specific form is still prevalent. Yad Meir and Shevet HaLevi cite Hago’os Mordechai as a source for adopting such an approach regarding leaving eggs, onions and garlic overnight. They are supported by the fact that the Shulchan Aruch cites certain dangerous activities listed in the Gemara but not these. Minchas Yitzchok discusses this issue and concludes that there is basis for those who are lenient.

78 comments for “What are the most bizarre frum Jewish beliefs?”