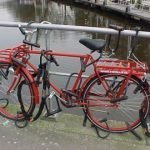 I had a dream last night that my car was stolen, so imagine my surprise when I went to get my car from shul tonight and found the rear window smashed and two of my bicycles gone. My first thought was that this week one of the best on record and that I hadn’t been able to show enough appreciation to God for all the good things happening in my life. My theory is that when things are going too good, something bad has to happen in order to get you close to God again, to me, it’s one of the purposes of life – to get you thinking that God is in control and no matter what you do – he can take it away in an instant.

Whenever I leave my bikes in the back of my car, I cover them, whenever I leave them over shabbos in back of the car – I lock them to each other and to the inside of the car – I was running late for shul so I just didn’t lock them, I remember the split second debate and thinking I didn’t want to miss davening shemona esrei with a minyan. Alas, they are gone and there is not much I can do, except learn from the event.

This past week has been one of the best on record, life in fact, does keep getting better and better and I was wondering what sort of hakaras hatov I can show to thank God for it – I guess I didn’t make it in time, because it was decreed on Rosh Hashanah that my bikes would be stolen (in the prime cycling season) it could have been due to my need to give more tzedakah or a million other reasons. It could also have happened because God wanted me to give my thoughts of the event over to the world. As I stated before, the week was a good one, thinks are happening in my life that I cannot discuss yet with the public – but they are good things and they are happening quick – whenever something good happens we humans tend to forget about God, but when bad things happen we cleave to him, my life has been just that. In my adult life, I have never been financially successful (I mad 80k one year – but was emotionally miserable) and it hasn’t been too bad, but whenever I save up money, whenever I’m finally out of the hole – something like this happens and I have to go scrambling around to try and figure out how to pay next months rent. Good thing I work in restaurant, I never have to pay for food.

Unlike other material things in my life that have been stolen from me, bikes are the most painful to lose. My bikes are my babies, I ride them every day and like any cyclist knows, have grown attached to them. One of the bikes stolen was my road bike, it cost $1000 and I had recently bought a new wheel set for it, it had about 4,000 miles on the thing and weighed 18 pounds. The other bike was my street bike, a mountain bike used for jumps and tricks, which I rode nearly every day in the city of San Jose, around the Stanford campus or around the waterfront in San Francisco. It hurst more because the street bike was older and customized heavily to take the abuses of skateparks, roof drops and jumping onto picnic tables and that sort of thing – it cannot be replaced and when it has to be replaced it will cost at least $1000 to do so – although Craigslist may be good to me.

I happened to be talking to a lady friend of mine at the time of the discovery and she immediately offered me one of her road bikes that is sitting around – if that works out it shall be nice. But still whenever something bad happens I begin to reflect on the path of my life, my spiritual quests and my closeness to God. Unlike most people, I don’t have the classic existential question of “why do bad things happen to good people?” because I know that life is full of challenges, these challenges are supposed to build character and force someone to grow close to Hashem. Funny that I was literally reading Iggeres Ramban (Ramban’s Mussar Letter) on Friday night during shul and the entire thing is about anger and humility and how humility leads to fear and love of God – I think the biggest importance is how we react to loss. I look at loss as the best chance to figure out life, figure out goals and make a cheshbon.

As strange as it may seem, I am constantly debating with myself about putting up certian posts, I never just hit publish – it’s a whole spiritual process of “is this going to help anyone” followed by “is there any point of this, or is it just letzonos” of course much of the stuff I put up may not have apparent meaning or be helping anyone, but I’ve been in contact with enough readers to know that you just never know how something is going to help someone. People are strange beings.

So this is where I say you should give me money, because I provide you with lots of entertainment for free, last time I asked for donations it was when my car died, this time two of my prized possessions were stolen and it was coinciding at the point when I was going to ask for help with buying a new computer (someone already donated an older computer which I can’t seem to get to connect to the internet)

My laptop is 8 years old, has no webcam, no battery life and freezes enough for me to actually get mad at it. I honestly have no idea what I’m going to do with out my bikes – hopefully I can replace one of them quick before I go insane. No amount is too small or large – last time I asked for donations – I received $900 toward the purchase of my new car (which now needs the rear window replaced) and the donations ranged in amounts from $5 to $150.

My paypal is [email protected] – if you click personal – they will not charge me, thank you!

← A Trip To Miami video goes viral
Purim Videos Across the Internet; the Orthodox Museum; The Granddaughter of Jewish Humor →