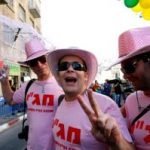 Believe it or not, some gay folks actually keep halacha (besides for the better to die than sleep with another man thing – but let’s be dan l’kav z’chus – who said they are acting on it-Right?) Not only do some gay folks keep halacha, they probably have a lot of unique shayalas that would take a mamish gadol from pre-war Europe to tackle.

Halachic Questions for the gay man:

Do I need to check my strap-on for shatnez?

Do we really need to do the hole in the sheet thing? It’s really awkward unless done in missionary.

Can my partner and I keep a form of niddah? We heard that mikvah night is supposed to be da bomb.

Am I allowed to go to singles shabbatons to scope out the guys, or is this included in the commandment not to place a stumbling block in front of someone – by leading the girls on.

Does Astroglide contain chometz or kitnyot? Do you know of any lube companies that are kosher for pesach? (Can we usean uncertified lube if we don’t eat it?)

Is lube allowed on shabbos? If we go raw there may be blood and I know that’s assur.

Are shtenders considered holy, or can we use them during role playing?

Are shaigetz’s for practice or is everyone fair game since it’s against the Torah anyway?

So I took the plunge and joined Saw You At Sinai, a big step in the right direction for me to realize that even though I haven’t thought about dating or marriage in some time, I should force myself into thinking about it.

Is it better to stay in the closet and live a lie, or to come out and bring pain on my family?

If we were to have a basement minyan for gays in my Monsey home, could we have a mechitzah to separate those in relationships?

Is it considered untznius for me to eat phallic-like objects such as bananas and Popsicle sticks?

Do talesim actually have to be black and white, or is my rainbow talis kosher?

39 comments for “Halachic questions for the gay man”