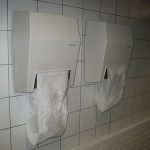 There are some pretty disgusting things that go on yeshivas, but what else do you expect when you throw a bunch of ill mannered frum guys who never learn how to clean up after themselves into a yeshiva dorm together? This post isn’t even about the guys who’s rooms smelled so bad, that no artificial aerosol stuff could have saved them. This post isn’t even about the folks who left their soiled JC penny underwear ads behind the toilets, this is about some generic items that I’m sure exist in most yeshivas and that most folks who spent any time there could find reason to smile about. Everyone else will find it educational.

Tissue Boxes: In my yeshivia they had their white tissue boxes with pictures of mountains on them. Unlike normal people, yeshiva guys decided that whenever a tissue box was empty, they wouldn;t throw it out, they would fill it up with as many used tissues as possible – spreading disease throughout the yeshiva. Some guys would also tear off pieces of tissue boxes for scrap paper and when the box finally on it’s last throes, someone would pause mid thumb dip and throw away the box and then steal some other tables box while one of the beis medrish guys turned around or something.

The never ending towel: I have fond memories of the never ending towel that was installed outside of the downstairs bathrooms in the Rochester yeshiva. The never ending towel was blue and as you guessed it never ended, you just rolled it out and for some reason it kept going like a long rug being pulled out from a wall. The problem was, that the yeshiva was too cheap to install a proper never ending towel, so like most yeshivas the towel eventually became quite wet, dragged on the floor in the urine tracked shoe marks and became one big blue soiled, over used, germ filled wash cloth. The never ending towel never seemed to function as it was supposed to and I myself never used the darned thing.

Mayim Achronim: I have no idea why yeshivas can’t afford to splurge on something a bit nicer than two plastic cups for mayim achronim, but they don’t and when the two cups, one containing a used fork or spoon, roll around it’s gross enough to make you puke in your mouth.For some reason, the mayim achronim appointee is always some douche bag who takes a cup that’s already dirty as hell and makes that the mayim achronim receptacle, why they need to add a spoon to it is beyond me most of the time.

George Foreman Grills: Yeshiva guys never really cooked, all they really did was use sandwich makers, crock pots and George Foreman grills. Naturally, these items were seldom cleaned, nor were the areas where they used them clean and after a while these machines became quite encrusted with nastiness. It is possible that some of them had taken the philosophy on cleaning woks, that you never use soap because you want the flavors to remain in the wok.

← 40 year old frum virgin: How not having sex ruined my life!
Is work supposed to be this fun? →