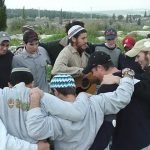 Only people who don’t really know any hippies would ever try to call me such, yes I like the Dead, I listen to jam bands, I take long road trips, drink craft beer and enjoy smoking a bowl once in a while, but I am hardly a hippie – I can’t stand 2 hour long havdallahs, hate those nannach guys and quite frankly I prefer girls with shaved arm pits. The hippie movement is growing every day, half of the secular kids who frum out in Israel go through that hippie phase and there are loads of stereotypes we can place on hippie Jews.

Shlomo Carlebach: You would think by listening to Jewish hippie’s sing that there were no other niggun makers besides for Carlebach. He is much loved, many Jewish hippies like to use his “holy brother and holy sister” phrases to welcome people and many older hippie Jews remember the days when his House of Love and Prayer was the top scene in the Haight in San Francisco.

Long Ass Havdallah: In yeshiva we were the exact opposite as the hippies, we would all gather round the candle and the person saying it would start in the middle, skipping the first half. Jewish hippies always do really long havdallah’s, maybe because many of them don;t really keep anything all week and they are sad that this is the last thing until the next havdallah or maybe it’s because any excuse to whip out the guitar and drums is a good excuse. Now I admit that sometimes it’s kind of cool, the music, the vibe and the dancing – but to me it’s not havdallah, it’s just one long dance surrounded by an assured bracha livatalla.

Techeles: Every Jewish hippie needs to wear techeles tzitzis, they spend an extra amount on them and no one seems to know what on earth a chilazon is anyway – so in my mind it’s one big scam on those who are too doped up to realize that tzitzis shouldn’t cost 80 bucks.

Wearing white on shabbos: I know someone who was such a gung ho hippied out purist that he bought a white streimel, white is pure and on shabbos we’re supposed to be pure, so everybody needs to wear white – I have no idea how they eat like hippies if they’re wearing white. Cholent stains suck and you can’t exactly get them out without breaking shabbos.

Hand Kissing: They love to shake your hand and then kiss their hand, I’m guessing that it when the first neo-chassidic hippie Jew did it he wasn’t thinking of immunization – but it seems that could be the only reason to do such a stupid thing.

Rav Nachman: I have actually met a couple of real Bresslovers in my life, they absolutely hate the nannach guys, the hippie folks who claim to be bresslov and those cracked out yeshiva guys who feel the need to wear a nannach yarmulke on purim. Rav Nachman is loved by all hippie Jews, he is quoted often and everyone seems to know a lot of stories about him – even though almost every story I have heard about him seemed to parallel similar stories about the Baal Shem Tov.

Gematria: Chabadnicks and hippies are the only ones who use number games to tell silly devar torahs, I personally hate gematria – mostly because no one ever bothers to check it because they place so much trust in the peyos swinging punk rocker that keeps saying “this is such a beautiful peice of Torah” as he sways with his eyes closed.

Random Clapping: I know all about the point in kabalas shabbos where even non-hippies clap, but I have been at weekday davening when some hippie Jew decides that in the middle of his silent amidah he should start clapping as if he were giving a standing ovation to Leonard Cohen or something.

Peyos: There are quite a few hippie Jews who have peyos, but don’t look like the types. Hippie Jews also tend to force their poor unsuspecting children to grow wild un-groomed peyos who then proceed to get their scalps ripped off when they get too curious about an escalator. I admit, peyos are kind of cool, especially when some super lefty who doesn’t keep kosher and has lots of tattoos happens to have some gnarly peyos.

Big colorful yarmulkes: You can’t really be a hippie unless your yarmulke doesn’t cover your entire head, if you have dreads your excused from this rule, but most hippies have large knitted or crocheted yarmulkes.

Tzfat: Need I really explain this?

Kaballah: They are in love with the mystics and are really into kabballah art. Kind of like the same way that regular sort of hippies love Escher, Jewish hippies need some of cheap colorful lithograph of the 10 sefirot on their walls.

The Moshav: Not to be confused with the Moshav Band who gets their name from Moshav Moddiin – kind of like the tiny drop more religious and more mainstream, still in existence House of Love and Prayer in Israel. I spent succos there once a a really cute short mans house and ate by someone who felt the need to decorate their walls with Janis Joplin and Jimi Hendrix pictures.

Rav Kook: The first modern day chief rabbi of Israel and a pretty trippy dude who dealt with a lot of metaphysical and kabbalistic stuff that hippies tend to like.

Adamah: Almost every girl I have been set up with in the past few years has been an adamanick at some point in their lives. A program that takes upper middle class Jewish young adults and teaches them about organic farming, sustainable practices and other liberal Jewish hippie stuff like trying to figure out how to make kosher food ethical and constantly talking about the horrors of the kosher meat industry.

Hazon: I had no idea that there was any Jewish food movement, but Hazon claims there was because they are the creators of the New Jewish Food Movement, which is trying to force the organic and green scam on all of us Jews by showing us that it’s unethical and unkosher to eat the way we do. Eco-Kasharut is cool, but being told by a bunch of hippies who probably don’t keep kosher, to add another layer of supervision onto an already high prices item is a bit unrealistic – but upper middle class Jewish hippies from Long Island don’t have to figure out how to afford kosher meat do they?

Challah that sucks: I have sat at dozens of hippie shabbos tables in my day and have tasted the worst challah at many of these tables. I find that hippies think that if it has loads of seeds and indigestible grains inside they love it – I’m a realist – challah should be edible and I’m on the fence as to whether it should have flax and sprouted wheat berries inside of it.

Marijuana Mesorah: Way before my old classmate published cannibus chassidus, there were Jewish hippies trying to tell me that the Baal Shem Tov smoked a pipe before shachris and that this must have contained weed – of course they failed to realize that the baal shem tov lived in a time where there were no corner hydroponic stores and certainly no grow lamps – I highly doubt those cold Russian winters were good for growing herb. Jewish hippies aren’t the only Jews smoking weed, but they are the only one’s trying to come up with some sort of mesorah about it.

Garden of Emunah: As the name sounds – a Jewish hippie fave, it’s actually one of my car seforim, along with a mini mesilas yeshurim.

Tapestries: Possibly the key into realizing you are in a hippie home is when they have tapestries or old table cloths as doors and decorations, they also have them in the succah.

Custom Matzah: Go to a hippie home for pesach and I have no doubt in my mind that they will have sort of custom ordered matzah that’s gluten free or brown.

Chassidut: You can never say chassidus, no one would have any idea what you’re talking about.

Non-hechshered hippie food: What could be wrong with the almond butter, kale chips or honey that we are passing around. I think there is a general lack of kashrus knowledge amongst hippie Jews.

Eilat Chayim: Talked about frequently amongst hippie Jews, though I still have no idea what it is – I do know that it used to be near Minnewaska State Park in the Hudson valley.

Reb Zalman: Possibly one of the only apikorsum alive, he was a student of the fredike (previous Lubavitcher) rebbe and went on to found Renewal Judaism. Hippies love this guy and they flock to Boulder, Colorado to be near him.

Strange colored talesim: I used to think that folks wearing a talis with colored stripes was progressive and then I started seeing talesim made out of flannel, blue jeans and khaki.

Bat Ayin: Any frum Jewish hippie worth their weight in salt should have went here for yeshiva, it was known as being so right wing that anyone who came into the settlement in a German car was liable to have their car destroyed and there was a story about some Arab guy stealing goats who got all his herd slaughtered. I spent a shabbos there and it was darned spiritual junkie hippie.

Nachlaot: The upper west side-like neighborhood for Jewish hippies who move to Israel.

← Dear Heshy: I was perturbed by your Far Rockaway articles
Chinese Auctions: Everyone’s doing it man →