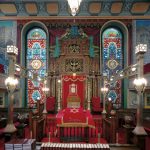 I’m a sucker for shuls that are warm and welcoming and I absolutely hate when a shul is filled with cold people who use excuses as to why not one person said good shabbos to me or invited me for a meal. It is possible that I expect too much, shul is a place to daven, it’s not a social event, unless you count kiddush and sleazy over the mechitza staring, but both of those things are by products of coming to shul to daven – so do shuls even have a responsibility to be friendly or welcoming in the first place?

The Rabbi in San Francisco told me that I should be a shul consultant, I could go into a shul and tell them what they were doing right and what they had to work on. Of course the results may be biased, because people would probably know I’m a reviewer so it’s doubtful it could ever work, but I have been to and stayed in more communities than anyone I have ever met and I could tell you that a warm shul isn’t just for guests, it’s for everyone.

In my opinion shuls do have a responsibility to be warm and welcoming, shul is an inherently social place, many communities have one shul and to make excuses (there is a Bay Area Jewish community which is one of the most unfriendly I’ve been in) like there are so many guests, or the place is transient doesn’t excuse your shul at all. I don;t expect to be invited out to a meal, it’s nice, but I do expect common courtesy, like the Rabbi saying good shabbos to me or teaching regulars that having a makom kavuah is nice, but publicly embarrassing someone because they sat in it – is evil.

I have been in all types of shuls and I cannot actually say if any type is more friendly or more judgmental than the other. Fact is, if you look differently than the crowd, you may get looks, if someone says something to you – tell them to piss off (unless you’re a woman who left the kitchen – you don’t want to start riots. )

I was recently in LA for shabbos and at the end of shachris at B’nai David, they announce that if anyone needed a meal or had spaces at their meal – they should come talk to this dude in a purple shirt, I don’t know why more shuls don’t do this. When I lived in Dallas, every single shul in the community had an official shabbos guest house every week – people signed up to be hosts and every week it changed always assuring stragglers, singles and guests a meal and company for shabbos. I can;t think of anything worse than having to eat a shabbos meal by yourself.

43 comments for “Do shuls have a responsibility to be friendly?”