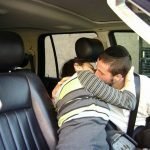 I’m not gonna lie, I had a friend with benefits situation once, we would hang out, but everything ultimately led to the back seat of my 92 Camry on some dead end street somewhere where we would share words of torah and saliva. As I’ve gotten older and more mature, I’ve realized that casual relationships with no tachlis (purpose, typically for marriage) are kind of stupid. Luckily, Hashem hasn’t planted such a huge sex drive in me and therefore I’m not tempted to involve myself in casual relationships that have no purpose other than to satisfy my yetzer harah and nefesh habihami. (animal soul) I slipped up over succos, but I promise the yetzer harah made her too hot to refuse.

Although, I’ve definitely had a few random hookups with fans of this blog and other girls in my lifetime, it’s not my thing, it actually goes against my religion and I try to refrain from touching members of the opposite sex unless it’s for tachlis. You see, if I’m in a relationship with marriage potential – I always feel like there’s a purpose to all that cuddling and heavy petting.

So I’m talking to this guy the other day who’s on and off with some girl he’s dating. “So what is this a friends with benefits type of thing?” I asked to which he responded that there was definitely some sort of tachlis involved and I thought of the most brilliant line of all (I like it – you don’t have to) and that he was in a Tachlis with Benefits relationship and that’s how I roll.

72 comments for “Tachlis with benefits”