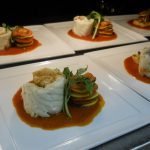 Taken by me at a wine pairing dinner we did in decemeber, this was the fish course paired with a covenant chardonay

I always wondered about people who worked really cool jobs who said they kind of “fell into it” how do you fall into being a condom tester, truck driver or those guys who drive around the baggage carts on the runway (have you seen how tight those turning radius’s are?) It seemed more of being in the right place at the right time, or knowing the right people, that is until I became a cook.

I have always loved food, but cooking is not one of things that anyone had ever mentioned to me. I have heard throughout my years that I would be good in sales, business or writing, but not once has anyone ever mentioned cooking and until a year ago I had never thought of it either.

I do remember this one mashgiach job I had infrequently at the Hyatt Hotel in Rochester and how fascinating it was to watch these cooks do their magic, creating beauty where none existed before, but I wasn’t a philosopher back then and the corporate lifestyle seemed to politically correct to me – little did I know that restaurants are the exact opposite.

Then, thanks to a fan, God and a lot of random stuff – I kind of fell into it. They say that cooking is a very hard profession, it’s stressful, there’s a lot of pressure, the hours are long , the pay sucks and you always seem to be working when everyone else is off and that’s all true, but it may be why I love it. I love the fact that there’s always something to do and that I am standing for 7 or 8 hours straight being completely focused and active with my mind and hands – it’s so different from my previous two jobs which were strictly desk jobs devoted to spending inordinate times online doing nothing for a lot more money than I make currently.

I cannot tell you how relieved I am to have found something that I actually want to do, this has always been my biggest fear in life, I feared I would end up stuck at a job I hated because I had mouths to feed – what kind of life is that? I kind of wish I would have known about cooking sooner, I’m kind of late in the game, it may take me years to rise to the level of a chef. Heck, tonight I just learned the simple fact that chefs peel ginger with a spoon.

There are downsides to this whole cooking thing, sure I can go into your home and whip you up a good meal in a quarter of the time it take you to do it and it will probably be better, but the big downside is that as I’m learning more and more technique and ways to manipulate flavors and make things better, faster, easier and so on – I have begun to despise most people’s cooking. Last time I was in New York, I simply couldn’t eat certian food or enjoy people’s cooking the way I used to – it’s painful that I can’t compliment those I once complimented because it would be lying. It’s not a pretentious thing, it’s just how it goes I guess. The upside is that, I don’t go to people’s houses for the food anymore (I am sure you have noticed the lack of food porn or free food references on this site – ah maturity) I go to their houses for the people.

I just moved up to Saute from pantry this week, before I was the guy who made deserts, salads and appetizers, but now I’m up to the entrees, prepping all the sides and cooking the sides and some of the main dishes on the line. It’s hot, sweaty, there are flames flying out of my pan whenever I flip some veggies, but it’s quite enjoyable to be learning new technique and how to tell the difference the between medium and medium rare by poking the meat with my finger. That’s another skill that I hold dear, the ability to reach into a five hundred degree oven to pull something out or to grab a carrot out of boiling water to see if it’s blanched just right.

Cooking has, I’m sad to say hurt the blog, I used to sit around at work and have time to think about what to write, now I just don’t have that luxury, no idea where it’s all headed because I have great ideas all the time, but it’s not the same as before. Part of me wants to start writing about food, but part of me holds this peace and enjoyment sacred – part of my “don’t get too personal” policy that most of you probably haven’t ever noticed, but this blog is about 25% of me and 75% exaggeration to get you going. I have the thoughts, but I need to add some spice (working with Mexicans has taught me to love and work with the heat) Habinero salsa just doesn’t sound so scary anymore.

FYI: The restaurant where I work is having a super pimp wine pairing dinner on March 14th  featuring Four Gates Wine (even if you don’t come – Binyamin’s Merlot is quite amazing). $125 per person and rumor has it we may be getting some pretty exotic meats that you cannot really get in any kosher restaurant.

← The most annoying frum Jews
Frum Acronyms you should know →

30 comments for “I kind of fell into it”