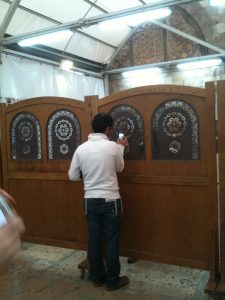 There was a time not so long ago when looking over the mechitza meant merely turning your head, pretending to do a neck stretch or merely delaying your lecha dodi turn a bit, but alas those days are over. A new study being conducted at various holy sites around Israel has found that more and more people are opting for digital devices to capture those behind the mechitza beauties rather than doing it the old fashioned way.The latest image to be making its rounds on the internet was photographed by Elliot Goldford (of Edmonton) at the M’aras Hamachpala in Chevron and it shows a young religious boy using a phone to look through the mechitza.

Yitzchak Goldstein of the center for electronic device banning is embracing the new study. “I don’t want to say I told you so,  but I did, I was first to congratulate the Gedolim for banning smart phones and digital cameras, I knew something like this was bound to happen” Yitzchak is just one of the thousands of people who foresaw such sins, he knew that phones could be used for a whole lot more than illicit conversation. “They can be used as flashlights to make yichud even more untznius and now they are being used as over the mechitza video surveillance, it’s disgusting”

“Big deal, they’re going to look over the mechitza anyway, at least this way they can save the image” That according to the RaHaF Shlita who takes a very liberal view on the subject of looking over the mechitza. “How do we know they aren’t doing shidduch research, we have to be dan l’kav z’chus, maybe it’s better they do this than look at dirty magazines or even worse – besides the girls who are going to places with a mechitza to daven are dressed very tzniusly anyway.”

Many holy sites already have signs for people to shut off their phones, but some are considered an all out ban.

14 comments for “Using cell phones to look through the mechitza”