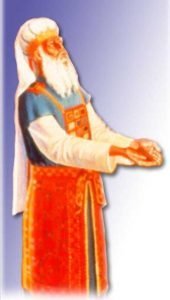 There’s a popular stereotype that fathers are strict, harsh, demanding, exacting and authoritarian while mothers are relaxed, mellow, flexible, carefree and altogether sweet.  That may not be how it was in your family (or mine), but when that’s presented as the case in, let’s say, a television show like The Wonder Years, well…let’s just say that it doesn’t generate the need for a tremendous suspension of disbelief.

The biblical commentators pick up on this sentiment — apparently, it’s always and forever been like this — and in reference to Exodus 20:11 and Deuteronomy 5:15, they explain that the imperative to honor one’s parents (kibud) makes mentions of the father before the mother because that is the more difficult task; who’s not going to honor their sweet, motherly mother?  But honor your stern, gruff father — now that’s difficult, and so the Torah mentions it first to emphasize the need to succeed.  Conversely, when the Torah makes reference to fearing one’s parents (yirah), the emphasis is placed initially on the mother (Leviticus 19:3) because that is the greater challenge.

This weeks parsha opens with the directive to Moses to fabricate the priestly garb for his brother Aaron and his sons.  In speaking to Moses, God commands him to create the holy vestments l’kavod u’lisifares — “for glory and splendor.” (Exodus 28:2)  He then instructs Moses to relay the message to the team of dedicated Tabernacle tailors and seamstresses to make the priestly attire l’kadsho l’chahano li — in order “to sanctify [Aaron and his sons] so that they may complete their priestly tasks.” (28:3)

Why the discrepancy?  Why does God provide two seemingly disparate rationales behind the fashioning of the sacramental apparel?  Well, much like spelling, grammar and punctuation are looked at to provide tremendous insight into the background of the story revealed by the biblical text, analysis of the choice of biblical vocabulary also serves to provide a greater understanding of the context of the verses, the meaning behind what biblical characters say or do, and more.

Moses was the leader, and not just any leader — we maintain that he was a compassionate leader, full of vigor in staunch defense of the Israelite nation when necessary.  And he was bold, taking the initiative to challenge God when he felt it appropriate and welcome.  He is the Jewish leader that all future Jewish leaders endeavor to emulate — wow, that’s big!  But with the lofty levels Moses achieved as a leader in direct communication with God Himself, God feared that Moses might, perhaps, overlook the psychological and ethereal weaknesses of the people and focus solely on ruchnius, perhaps best translated as “the purest spirituality” of things.  He therefore instructed Moses to pay special attention to ensuring that the ritual clothing for his brother and nephews manifested the appropriate majesty and gloriousness that clothing for such a role rightly deserved.

But to the people, who might tend to focus more on gashmius, the materiality and physicality of things, God directed Moses to stress that which they might, perhaps, overlook — an appreciation for the spiritual role the priests were to play in the Israelite camp and a recognition for the divinely ordained spiritual value these clothing were to have in relation to this role.