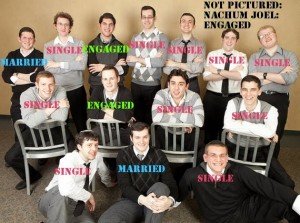 Truth be told, I didn’t post the Macabeats viral video (I was sent it way before it went viral) because I thought it was really gay (yes I know that term is offensive to the gay readers – too bad – there’s no other way to describe it) and I didn’t want it to turn into a YU/Modern Orthodox bashing fest, but I found this awesome post on some random blog named Walking The Gray Line about the Jewish girl crushes of the Macabeats and I got to thinking about a comment that someone made to me several months back. A friend of mine told me that I was one of the few single frum Jewish celebrities and that this would be a problem (it has been a boon and a problem for dating – it works both ways) since most of the folks who were “frum celebrities” were either married or mamash frum and non-controversial making it easier for them to remain married or date without having to give explanations of what they do.

Back in the day I was able to deny I had a blog, I was anonymous, I didn’t have a wikipedia page for God’s sake and I could float freely in obscurity. Then I went through a phase where I would tell girls or shadchanim about this blogging thing only after I knew them well. Fast forward to modern times, it’s tough for me to go to any Jewish event and not have several people walk up to me to say they are fans or people stare at me in restaurants only to email me later and say they thought it was me but weren’t sure. Don’t get me wrong, I’m down with the kavod and attention, but I’ve been trying to figure out how to bring it to the shidduch scene.

I recently decided to really buckle down with this marriage thing, I took stock and decided that I’ve found a rewarding career that has great potential and I have quite my transient ways – so naturally I decided to force myself into the shidduch thing again. I haven’t gone out on a proper date in 2 or 3 years (had 2 great long term relationships though) so I recently started telling people I’m on the market and I even joined Saw You At Sinai as a full paying member (I will have many rants and already I have found myself being matched up with fans of mine)

I haven’t really decided whether to place my shidduch resume on the blog as of yet, since 98% really don’t know me and very few of you could actually figure me out based on the fact that I probably give over about 25% of myself over the internet and the rest is my private life. There have been several people throughout the years that have gotten it right, A. Nuran and my previous girlfriend (both fans who actually understood, but they have been very rare) and although I break my rules once in a while, I try to refrain from dating fans – in fact – any girl I do date I try to let them know up front what I do, but I try to keep them from reading my stuff until they actually know me. For instance, I was recently chatting with this girl on frumster who said that she just realized 4000 people were going to read a facebook status update she deemed “offensive” which stated that “I need a wife who got horny thinking about our honeymoon backpacking the John Muir Trail” and she ended out internet courtship right there – of course I responded that she forgot that I had 2 Facebook accounts, Twitter, Buzz and a blog with 60 – 70k readers a month. I really wanted to say “You gotta be f%^&in kidding me right?”

48 comments for “Who wants to marry a Maccabeat?”