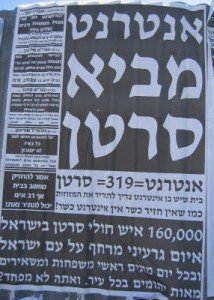 I’m not feeling well enough to write satire honestly, but news like this couldn’t wait. Thanks to Gila who sent me the following piece from Ynet News, which really makes me wonder if these people aren’t crack. I completely understand the fear of the internet, the fear that many leaders have of losing control of their flocks once they educate themselves, the fear of pritzus and secular society is very warranted – but you can’t just go and make stuff up, that really makes these people “whoever they may be” look like morons and it bothers me that they haven’t just tried to embrace this thing rather than combat it. Eventually they will have to deal with the evil internet (insert scary sounds here)

The Internet causes drought and terminal disease – so claims a new marketing campaign publicized in the ultra-Orthodox community and aims to curb use of the world wide web.

“Where there is Internet, there are no rains,” read one of the posters that were pasted in central haredi spots. “Let’s remove the foreign work from among us. Hundreds of thousands of cancer patients (suffer) because of the Internet.”

Fearing the community’s exposure to secular culture, different establishments within the haredi sector published the intimidating declarations, in addition to quotes from prominent rabbis – among them Rabbi Ovadia Yosef – that describe Internet use as the root of impurity.

“The connection to the Internet is an abomination, and the one who does it in his home brings abomination into his home,” Rabbi Yosef Shalom Elyashiv was quoted as saying.

“The Internet causes disease and all types of adversity. Since the creation of the world, there has never been invented a tool so dangerous and corrupting like it,” reportedly wrote Rabbi Shmuel Halevi Wosner.

The fear-inducing posters blame the inability of teenagers to study – and the destruction of tens of thousands of homes – on the web, and use gematria, which assigns numeric values to Hebrew letters, to prove that Internet equals cancer.

← Getting Stoned at a Bar Mitzvah
Who wants to marry a Maccabeat? →