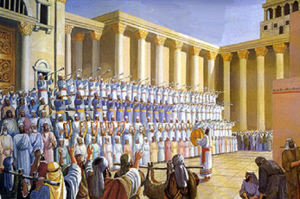 The Holy Temple in Jerusalem, which stood as two distinct structures spanning nearly ten centuries, is no longer extant, but the site of the sanctuary is considered by Jewish tradition to be the holiest site in the universe. Not only that, but the entire Temple Mount upon which the the sanctuary stood is revered, despite it lying in ruins and having been usurped by others through the centuries.

This is in fascinating contrast to Mount Sinai, the location of which is a mystery. One might think that Mount Sinai is at least equivalent in terms of its sacredness, yet we know not where it is.

Meir Simcha of Dvinsk, known by the name of his biblical commentary, the Meshech Chochma, explains that the Temple Mount is worthy of veneration because it was sanctified by people, whereas Mount Sinai was sanctified by God (Exodus 12:21).  So when God was done with Sinai, it reverted back to its plain and undecorated status, but the Temple Mount, consecrated by man, retains its status until desacralized by man — and because Judaism maintains that we are to anticipate the rebuilding of the Temple with the coming of the Messiah, the site maintains its holy status.

27 comments for “Dvar Torah Teruma: If YOU Build It”