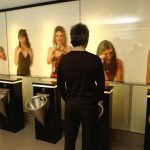 I usually work nights, so just before dinner service is about to begin at the restaurant I hop outside for a quick mincha between the transformer, m,y parked car and out towel recycling bin. The other day, I took my three steps back after I finished shemona esrei and walked back in to work while mumbling a barely coherent Aleinu (God would have probably rather I not say it all for all I know) and spaced out as I was I walked into the bathroom and said Aleinu while I was peeing, mid pee stream I realized the madness, stopped daveing (I didn’t stop peeing, I stopped saying aleinu while I was peeing) and started laughing like a crazy man while I sprayed my urine all over the place (just an exaggeration – I have years of practice and am practically a sharpshooter)

Have any of you done something so spaced out before?

Sure I clop selach lanu every single Friday night and correct myself so as not to seem that stupid, but this seemed a bit extreme to me, like am I that spaced out during davening or maybe I was so involved in davening that I lost my train of thought and was so intently concentrating on the Lord that I had sleep davened into the bathroom?

← Jews to Egypt: We refuse to rebuild the Pyramids
Dvar Torah Teruma: If YOU Build It →