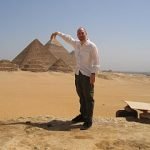 FS News has just learned that the Jews of Egypt and the surrounding countries have just announced that they will refuse to rebuild pyramids if they get destroyed by the violent protests wreaking havoc on Egypt in the last few weeks. The Jews also refused to allow their babies to be used as bricks and their walnuts to be used as mortar.

21 comments for “Jews to Egypt: We refuse to rebuild the Pyramids”