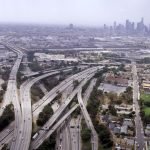 After writing the following facebook status “I have been living in California for over a year and have only gone to LA once” I got to thinking about taking a trip down to LA. The last time I went to LA I stayed in Venice, Los Feliz and Long Beach so I really didn’t get a good feel for the Pico hood and I wanted to check out the shuls and scene this time, so I drove down for shabbos and I was pleasantly surprised, my stereotypes, based on everyone telling me that LA is a pit of materialism and vanity vanished once I got to see the frum community for myself.

One of the biggest problems with driving to LA from the Bay Area is the fact that the quickest way is also quite boring, so instead of taking Interstate 5 the whole way, I took a small state route which runs between I5 and Highway 101, route 25 winds it’s way through the Cholome Mountain Range which was very green and filled with random cattle ranches. I passed one sign that told me there were no services for 76 miles – now that’s my kind of road. When I hopped on the 5 I was only a few hours from LA.

I got to LA at about 10pm on Thursday night and was desperate to eat milchigs, something really cheesy, I work at a very meat intensive restaurant and the big impetus for coming to LA was to eat some pizza and maybe some pasta – both of which I can’t get in the Bay Area. So I met my buddy at Cafe Nana, one of the few places open that late and I was crushed by the terrible menu, regardless we got an eggplant parm, fettucini alfredo and mozerella sticks – I wasn’t expecting anything too great so I wasn’t disappointed by the taste of the food as much I normally would be.

The problem with becoming a cook at a good restaurant, coupled with living in the pretentious foodie capitol of the US, is that I have to be careful not to expect too much. Cafe Nana is a low level restaurant with low level food catering to frum people. I could tell the clientele by just looking at the fish offerings – they have the 4 frummy fishes – talapia, salmon, tuna and chilean sea bass and everything seemed to be generic stuff. Admittedly the eggplant was decent, but it was $12 for a slice of eggplant with cheese on it. When my friend ordered a glass of wine they damned near filled the thing to the top.

For desert my friend took me to Toppings, one of the strangest kosher ice cream shops I have ever been in. The place was immaculate, the colors were cool and there was a line of self serve frozen yogurt machines, the man behind the topping counter gave us samples and I started saying to no one in particular that such a system would never work in New York, I myself just tried some samples and didn’t need to buy anything. At Toppings, everything is charged by weight, you get a cup fill it with ice cream and then choose from some wonderful toppings, like cookie dough flakes and little cheesecake squares which were delicious.

On Friday, my friend a fellow blogger Eliyahu Fink took me to Pizza Maven in Hancock Park, the frummy side of town. I wass marveling at the sites as I drove to the place. There were women in sheitles walking dozens of children all dressed in the same outfits, men in hats with peyos behind their ears and teams of high school girls drinking slurpies. I was getting my frum on, I felt almost exactly the same exact feelings I used to have when I would take a drive from Rochester to New York once every few months – it was the same 5 hour drive and it brought me to a whole new world. I remember thinking how fun NY was and always looking forward to getting the hell out of there. LA is the same way, I love the frummies, I love eating the food and looking at all the super cutties (LA is home to the best pritzus in America) but I thank God that I don’t live there. LA, like New York, is way too urban for me.

So Pizza Maven wasn’t too great, it’s good to eat pizza and look at frummies and the place was too clean to be a New York pizza store in a frum neighborhood. The guy behind the counter was a friendly older Boro Parker who shot the shit with everyone who ordered anything, but the pizza was a bit lame – too much dough, not enough cheese and no crunch. The mozerella sticks were lame – they seemed like they were from the package and ridiculously overpriced for what they were – I still maintain that the best kosher cheese sticks are made in Jerusalem Pizza in Detroit.

After lunch I went for a 30 mile ride on my bike from the place where I was staying in Pico to Santa Monica and around Venice, LA is not a cyclists paradise, in fact it’s the closest thing to hell I’ve ever experienced, I was honked, yelled at and multiple times cars would try and force me off the road or scare me by driving very close – it was definitely not a pleasant ride until I got to Santa Monica which is beautiful and traffic free. On my ride I felt like I was in a different state, LA is that much different than the Bay Area. Everyone is rushing everywhere and everyone is driving fancy cars and wearing nice clothing. It’s quite rare that I see anyone dressed up in the Bay and everyone drives corollas around here.

I had specific directives from friends, fans and confidants as to which shuls I should check out. Shul hopping crossed me mind, but you really cannot get the full feel of a shul when you stay for only a short while. On Friday night I went to the Happy Minyan, I was told there would be girls and I knew it would be a similar feel to the Carlebach shul and people were right.

The Happy Minyan was the happiest shul I’ve ever been to, everyone was hugging, dancing and smiling the whole time – it wasn’t just about the post lecha dodi dancing, this was full on happiness. It was also one of the most diverse minyanim I have ever seen. There were chassidim, yeshivish, modern orthodox, hippies and everything in between and lots of baalei teshuva. The age of the crowd was also a big range and the only disappointment I had was the fact that you couldn’t see the ladies. The mechitza was full heights and you could sillouhettes, but full on bodies were not visible and I was kind of mad. So during the post lecha dodi dance I stopped by the curtains and stuck my full head inside the ladies section for a good view – there were definitely some hotties in there and none of them were dancing which I found strange.

For shabbos shachris I chose to go to B’nai David, some folks told me it was a super left wing modern orthodox shul that would provide a lot of material. I have noticed that many people have different views of places when they haven’t actually been there, I didn’t get a lot of material there – though I intend to do a full review of the shul and it wasn’t super left wing at all. However, I should note that it was an extremely friendly and welcoming shul, something I haven’t experienced much in the modern orthodox community. Not only did multiple people say good shabbos to me, I was invited out for lunch and got an aliyah – but look for the full review in the next few days. Oh and their cholent was amazing and I saw Esther Kustanowitz at kiddush at we did some schmoozing which was nice.

I made my way back to Happy Minyan to meet up iwth Rabbi Yonah and his crew. I made it back just on time for kiddush and got to sample another decent meat cholent, not as good as the one at B’nai David, but not bad all. The meal at Rabbo Yonah’s on the other hand was one of those huge deals that I haven’t been to in a while, the sala course was enough by itself, loads of good wine and some mighty fine ladies to look at, definitely not to date because they all seemed to be on their way up on the BT indoctrination scale.

On shabbos afternoon I went with my host to daven at Aish, which is probably the most yeshivish offering in the Pico hood. When I walked in, this kid walks up to me and tells me that he’s probably the only yeshiva bucher fan – I told he wasn’t, there were loads of other yeshiva kids looking at my stuff.

It was good to get my frummy on, I had exactly the same feelings of the whole thing as when I lived in upstate NY. Great to visit LA and great to get the hell out of there and come back to the paradise that Northern California is.

FYI: After shabbos, I hopped over to Luke Ford‘s house so we could do a live streaming interview, over 100 people entered the chat room to watch, chat with each other and ask me questions directly – it was a lot of fun despite the fact that I was losing my voice due to a cold. Recordings of the interview should be available on You Tube soon.

Luckily Mr. Ford went out with me to Nagilla to see if anyone would show up to hang out for the LA Meetup no one ever did. Since I received about a dozen emails and FB messages claiming interest, I figured about 3 people would show up. Based on my event organizing experience, about one quarter of the people who claim they will show up, actually show up. So I ate pizza, they like theirs underdone and I do too so it was good and there were loads of frummy girls and chabad kids to look at. Then I walked around and ended up tasting the worst Mexican food I’ve ever had – the Takosher (kosher taco truck – that has some shady hechsher, because there’s no mashgiach temidi – I realized this afterward) I could have made Mexican food way better than they did and I was extremely disappointed.

On Sunday morning it took me forever to find a bagel shop, not a fancy pastry shop with panninis and over priced danishes, just a regular bagel shop and when I did, the everything bagels were literally encrusted with every topping possible at the Bagel Factory on Robertson, I hate caraway seeds, but it was good to actually eat an everything bagel.

33 comments for “Shabbos in Los Angeles was good”