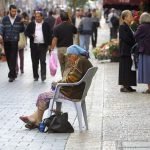 I was checking out the scene on Pico Boulevard on Saturday night in Los Angeles and I got to talking with this poor Jewish fellow standing out in front of Nagilla Pizza asking for money to pay his medical bills. He seemed like a reasonable enough guy so I gave him $10 and had a nice little chat with him about life and his situation.

I also had the opportunity to watch how people react to someone collecting money first hand. The man had plenty to say, as since he was laid off from his company selling time shares and had multiple strokes – he’s gotten this completely different and sometimes sickening view of the frum community where he asks people for money on a daily basis. Now, I wasn’t there to do anything besides have a chat with a guy who people merely pass and try to ignore. I always feel like the hardest part of being someone who’s so far down on his luck that he has to go out and ask people for money has got to be the way people treat you, not the giving itself.

I stood with this man for at least 45 minutes and not one person said a word to him besides for me. He wasn’t a forceful meshulach, in fact, I would venture to say that his calm demeanor hurts his “earnings” because he asks for tzedakah in a very soft voice and shyly gives over his teudah from the West Coast Vaad Hachesed. I almost wanted to start screaming at the dozens of passersby that they could at least look at the guy when they claimed not to have any money, but most people get uncomfortable – I almost felt that they wanted to block out the fact that they had a perfectly normal looking rum dude admitting that he was broke enough to ask for handouts to pay his medical bills.

I don’t expect people to stop and talk with the man, I merely did so, because that’s my thing – I always give something to the folks begging at exit ramps for money or food and I always try to have a word with them before the light changes, but I was fairly disgusted at the way people gave the guy money. He was saddened to tell me that the people who gave him the most money were the non-Jews and non-observant Jews. He told me that the Persian women would force their husbands to give money and then ask him to make a bracha for them. He seemed to know everyone, he remembered who had smiled at him two weeks before and he pointed to one fellow sitting in the pizza store who had gotten up in the middle of his meal to give him some money.

So naturally I asked him if he was looking for a job, he claimed he was, I took his name, number and email address – he seemed like a pretty intelligent guy, so I told him maybe I could find him a job – the only problem is – he cannot really be out in the sunlight, not too good for someone living in LA, but nonetheless I figured it’s a shot to pass along his name and number to anyone who has any sort of position open – he worked in marketing and sales for many years.