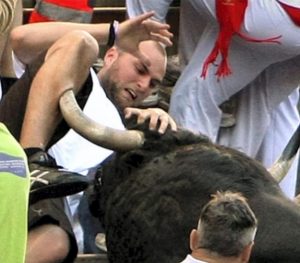 For a really long time, now, I’ve had a special fondness for Mishpatim.  That’s why, in 8th grade, when Assistant Principal Rabbi Binyomin Yablok asked that each male student pick a parsha to lein (for, without motivation, it was really just the same Lubavitch guy who leined every week), I picked Mishpatim.  Little did anyone realize at the time that Mishpatim was to fall out during winter vacation and I ended up leining at the Bialystoker Synagogue where I lived at the time.

There’s a very popular understanding among Orthodox Jews that there are three types of biblical commandments: those that are classified as eidus, those that are chukim and those that are said to be mishpatim.  Mishpatim are generally explained to be those commandments which make sense to the common man, and that one would have been likely to propose without divine intervention, such as those relating to theft, murder and other civil laws like marriage, divorce and the like.

Eidus commandments are those that would not be understood prior to God’s commanding them, such as the laws related to Passover, but that once commanded, can be easily understood as serving to establish God’s presence in this world in a meaningful and understandable fashion.  Chukim are those commandments which make no sense.  They seem arbitrary and random, like the laws relating to the red heifer or shatnes.

A while back, I heard R’ Aharon Kahn speaking about this topic and something he said took me totally by surprise — I had never thought of it, but after I had heard it, it seemed odd that I had never heard or thought of it before, because it’s such a simple point.  He said that all of the biblical commandments are really chukim.

You might say to yourself, “yeah, stealing doesn’t seem right.”  But would you ever think to suggest that the punishment for cat-burglary should be to pay back double, or that for stealing an ox, one ought to pay five times the price of the oxen?  And that it should relate to whether or not you sell it or kill it after your steal it?  That doesn’t make any sense.

And what about when your property damages my property — should it matter how many times that has happened already?  Eh, maybe.  But would you suggest that damages can initially be collected only from the value of the damaging party’s perpetrator, and that only subsequent attacks can be collected from an unlimited source of funding?  That’s not straightforward at all.

Slaves should go free if one of their fingers is cut off or if one of their eyes are poked out?  Husbands may not remarry their divorcees if that divorcee was married to and subsequently divorced from another in the interim — that’s widely accepted as universally logical?

So, R’ Kahn points out, really all of the biblical commandments are chukim.  I thought that was an interesting point.