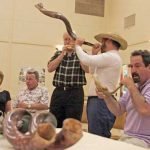 You may have noticed that I closed the comment for the post preceding this one and that’s because of the gays, yes finally I can be a real frummy and blame something on the gays, it’s not an earthquake or a tsunami, but it’s close! So I wrote the post as satire, I didn’t even write it, it was copied posted review of an eating healthy shabbaton (obese Jews who want to start controlling their chulent and deli roll intake) and reworded it a bit. Maybe if I would have included the link to the original people would have “got it”, but alas they didn’t.

Not only did most everyone who commented not get it, but they found it offensive. It just so happens to be that comments are a poor judge, I have noticed that when a hot topic post comes out, everyone encourages their friends to stick up for them in the comments section (check out the poking fun at sephardim post for a great example of people whop have never read this blog before – attacking me) and before long it turns into a heated debate. Many of the people commenting failed to realize that I have written dozens upon dozens of posts making fun of the frum communities homophobia and showing my support for those struggling with the enormous challenge of being frum and gay.

I make fun of everyone, but suddenly when I decided to make fun of the gays they felt hurt, saddened and felt the need to send me dozens of messages telling me why it’s different. Seemed like a double standard to me when I made the ranting video below, but I received a few messages telling me why it was different. That I was feeding the hate, they obviously haven’t read my piece on how the frum gay crowd will soon be into bestiality and the comments that followed. So am I feeding the hate, or showing that the hate is stupid.

One frum gay woman told me that it was different because there is a real fear amongst openly gay frum folks of other religious folks acting violently towards them and that’s pretty scary.

Here are some of the messages received:

I just read what you wrote on the Eshel Shabbaton. I know that you regard your blog as equal-opportunity satire/bashing or whatever, but I just would like to point out a couple of things, if I may, without hostility.

1) People read what you wrote and didn’t realize it was satire.

2) Many frum gay Jews face real danger every day of their lives. They face losing everything up to and including their lives for something which they did not choose.

3) Blood libels against Jews, that is, individual incitements based on false accusations of specific cases, often very obviously fabricated, lead to the deaths of thousands of Jews throughout the Middle Ages and beyond. None of these individual incitements were reasons on their own for the violence that they incurred, but rather provided a convenient excuse for people who were already inclined to harm us.

For a population so constantly under attack, I would, indeed, suggest that perhaps such a piece as the one you wrote is inappropriate and even dangerous. I can understand your thinking that this piece is balanced out by other things that you have written, but having heard some of the truly harrowing stories of the people I met at the Eshel Shabbaton, many of whom still live in hiding in their communities, I’m inclined to think that we are not yet in an age where we can take this lightly.

God willing we will soon be able to laugh about this… but for now I really think it is too painful and too dangerous. I hope you will take some time to consider what I’ve said, with the understanding that it is not my intention to attack. I’m not expecting a retraction or anything of the sort… I just want you to hear this, take it in, and think about it.

Heshy, I know you are supportive. I wrote that on my facebook page when I posted the article. I also know you are writing satire.

I think (and I could be wrong) that the difference is that this just feeds into a certain segment of the population’s fear and hatred of queer folks, and sort of riles them up. It makes me nervous, because crazy folks in the orthodox community (like Nate, possibly) were responsible for what happened in Tel Aviv.

It’s a really fine line when it comes to something that has the potential to push people’s buttons so strongly. While I recognize that you satirize people equally, I don’t think some hothead is going to bust into 770 and machine gun chassidim as a result of your Lubavitch satires. Whereas I am not as sure when it comes to queer folks.

I guess all I’m saying is “tread carefully”…

And yes, I appreciate your supportive posts, and your attitude in general.

← I went to the frum gay shabbaton and loved it
I’m sick of prayers for the sick. →