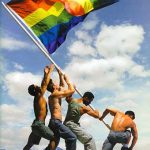 “A whole Shabbos without fearing a mob of Charedim was going to beat me? I never thought that would happen!” So said one of the more than 100 participants who joined Rabbi Steven Greenberg, Rabbi Paysach Krohns, and Shloime Dachstein at the Eshel Shabbaton, held last weekend, Parshas Chayei Sarah, at the rustic Isabella Freedman Retreat Center in Fallas Village Connecticut.

Billed as “two days that will nourish your body and soul”, the Eshel Shabbaton provided a pioneering program in the Jewish world – an inspiring and what some called “life-changing” Shabbos experience, focusing on healthy relationships and developing proper speaking techniques.

Rabbi Krohns delighted the crowd with motivating stories and penetrating divrei Torah on connecting to HaShem while being penetrated, and the Torah perspective on being gay, but not acting on it. The founders and directors of Eshel, offered in-depth and practical workshops for men and women on how to develop a healthy relationship with each other, as well as telling their own uplifting stories of struggles and success with being frum and gay. Shloime Dachsteins’ davening, kumzitz and Melava Malka concert added greatly to the ruchniyus and ruach.

“The innovative idea to have a “gay Shabbaton” is truly ‘yaish ma’ayin’ for the frum world,” said Mr. K. from Elizabeth, NJ. “Who would have thought that we could have an enjoyable and spiritually meaningful Shabbos without feeling so alone? Yet with the theme of ‘V’nishmartem meod l’nafshoseychem,’ the physical goal of same sex issues became elevated to a level of ‘avodas Hashem’, thus turning what is often felt as deprivation into a lofty pursuit. Being with others who, like myself, are seeking something that goes against the Torah while keeping the torah at the same time and witnessing the success of others afforded tremendous chizuk.”
The Shabbaton was filled with a unique mix of stimulating lectures and concrete tools to help participants begin making lifestyle changes that have often seemed too difficult to start or too hard to maintain. One of the highlights occurred during the Shabbos day seudah when Rabbi Greenberg asked everyone to put down their forks as the steaming bowl of chulent rested in front of them. It wasn’t easy for many people to “break away” from the impulse of the eating once they started. “How many people could skillfully equate refraining from a bowl of steaming chulent as a comparison to love and sex?”

“Who’s in control?” Rabbi Greenberg asked. “Does the chulent control you, or are you in charge? Can you enjoy the delicious food and still be in control, not having to stuff yourself with second servings in order to feel satisfied?” he challenged everyone. “Being frum and gay means enjoying good chulent but knowing when to stop and being able to stop.”

The theme of the weekend, “Nothing Feels as Good as Coming Out to your family and being disowned by them and abandoned by your community” emphasized the importance of being open with yourself and others, not about living the lie. Having a family is one of the primary opportunities to elevate ourselves spiritually by not being controlled by our physical drives and desires. As Rabbi Krohns pointed out, “our connection to HaShem depends a lot on how we behave when we are married.”

Rav Yisroel Salanter understood that if one’s health is compromised, then he cannot function properly, including his performance of mitzvos. Thus the enhancement of the neshoma is curtailed because of physical flaws in the human body! Rabbi Krohn posed the question, “Could it not be that after 120 years on the ultimate day of judgment, that we will be held responsible for our health issues if we were negligent (didn’t get married, didn’t have children, didn’t have sex with the one we loved etc.) because it led to a decrease in being able to perform mitzvos or study Torah?”  Is it really worth it to refrain from love and true happiness?

“This morning (Sunday) I felt great, light, and invigorated, not nauseous as I do after every Shabbos,” said R.W. of Williamsburg. “On the way back from the hotel we went to visit friends. Suddenly a tray of cake materialized. There was seven layer cake and kokosh cake, marble cake and rainbow cake. They each called my name in a different tone joining together to become a beautiful symphony. Let me tell you this much. I was really tempted. But then I blinked, and in my mind’s eye I saw a plate of hot steaming chulent, with rice, chicken and vegetables, and I heard a voice behind me say, ‘Put down the fork everybody. Who is in control here, you or the food?’ Whereas in the past I allowed the cake to be my boss, this time the tray remained untouched. I was in control. This Shabbos really made a difference in my life. I decided to only eat the rainbow cake.”

← How do you kiss the torah?
Making fun of frum gays is fair game – or so I thought →