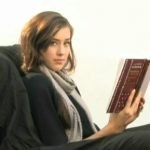 I’m minding my own business at work the other day and this server comes in and asks me if we still do arranged marriages in orthodox Judaism. I told him that you may consider some of the very religious sects to be somewhat akin to arranged marriages, but even they have a choice in who they marry, sort of. Well he found it strange that an unbelievably beautiful woman was sitting with a terrible looking guy on one of the tables, it bothered him so much because of the difference it looks that he needed me to step out of the kitchen into the restaurant for a moment.

I walked out of the kitchen to take a look and sure enough it was a chabad couple. The server was flabbergasted and told me he couldn’t believe it wasn’t an arranged marriage and I caught myself before going into a rant about the hotness of chabad girls because he surely wouldn’t get it.

But people do get it, countless people, chabad and non-chabad, guys and girls have told me what I already know, chabad girls are beautiful, the most beautiful of all the Jewish sects, save for Israelis.

Why is it like this? Did the Rebbe’s blessing that chabad girls would be hotties really come true? Were chabad girls always hot? The Rebbe’s was wife was a pretty good looking lady in her younger years – did you know that she and the Rebbe saw each other for many years before they wed, the stuff you learn that chabad Rabbis don’t want you knowing.

Many people say that chabad girls are all about style, grace and the way they take care of themselves, it’s true, they know how to dress – but when it comes down to it – there’s something more to it. Could it be that the influx of hot baalei teshuva and gerim has made the gene pool better, less likely to get Tay-Sachs or one of the Jewish diseases won’t make you better looking, in fact Crohns may actually help some folks in the looks department. So what gives?

It’s funny because when I first started blogging I used to write about this all the time, I was kind of obsessed with this one chabad girl at the time, who in later years told me she was a bit into me as well – oh well and one of the most beautiful girls I had the pleasure to know was a chabad girl, so I’m a bit biased, but almost everyone agrees with me.

61 comments for “Even non-Jews think chabad girls are hot”