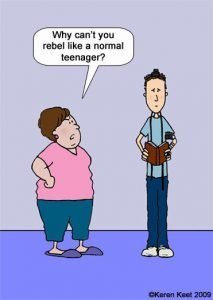 BT’s a strange breed, if there was a graph documenting the progress, it would have a very steep starting line followed by a pretty far drop, then a raise and then leveling off. At the point where BT’s (sometimes this can take years) become regular old frum people, they begin to do certain things that their former selves would have cringed at – but they are no longer labeled as baalei teshuva, they have officially become regular old frum folks.

20 ways to you tell you have finally abandoned your BT status:

You stop wearing techeles in your tzitzis

You start showing your elbows (girls)

You start becoming a little cynical about Judaism

You don’t go to shul every day

You admit to people that you weren’t always frum

You reminisce with other BT’s about your former life

You stop being so machmir and start looking for heterim

You begin to knowingly break halacha

← Even non-Jews think chabad girls are hot
How do you kiss the torah? →