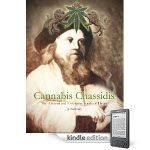 I have yet to smoke a cigarette and only took my first hit off a join at the age of 27, yet from the age of 12 I was surrounded on a consistent basis by smokers, stoners and avid drug users. I’ve always had the stoner look, shaggy hair, general unkempt look and baggy clothing always contributed to people wrongfully judging me as a druggie. Since I can remember, I can turn myself high in an instant, mostly because I am a excited about life kind of guy, but folks – especially at weddings or other simchas think I am high or drunk which is very rarely to case.

In yeshiva I hung out with the stoners and the folks who liked to drink and smoke cigarettes, yet these pastimes were never my thing. I kind of prided myself on my abilities to refrain from peer pressure and my natural ability to get high off of life, rather than ingesting pills or getting drunk. I was never against natural drugs per se, but everyone who knew me would always brag to their friends that was the guy who seemed to get high without actually getting high.

I always thought that if I smoked cigarettes I would have a lot more friends and probably have gotten laid a bit more in college, but alas I shunned the cigarette and never even smoked one. I did work in a bingo hall for many years, so for all I know the second smoke will kill me, but now second hand smoke gets me sick and I really have negative feelings towards people who smoke. It’s rare for someone to attend yeshiva and not smoke, the guys in my yeshiva used to hide cigarettes everywhere, they used to tape them to walls painted white and they used to hide them under their yarmulkes when leaving the building.

I guess rumors of my sobriety got out during high school, because never once was I drug tested, despite the fact that every new kid who showed up at yeshiva would always ask me if I had access to any stuff like drugs or alcohol – because I had the look. They basically started drug testing because this one kid almost OD’d on cocaine and suddenly everyone was being called into one rabbis office for piss tests. I was kind of scared because I am bladder shy, I can’t pee in front of people – it’s so bad that at some concerts I have to use the stall just to get my urine out. I was scared the rabbis would think I was on drugs because I was too scared to pee.

Then there was the famous Pink Floyd Laser Show Bust. A bunch of kids went to the laser show, got high and then got busted. It made things very interesting and I think it was the downfall of the yeshiva, for years they tried to improve their standing in the world of yeshivas, but forever they would be known as a last resort – although I think they would have been much more successful as a last resort yeshiva, they decided to get rid of all the good rabbis and make it real strict – either way – these kids all got busted and suddenly everyone was drinking cranberry juice cocktails to get the weed out of their systems.

There used to be this store down the block from the yeshiva called 12 Years Later, it was a dead head hippie store that sold dead bootlegs, bongs and tiedye and so all these guys would go in there and try detox products they sold, Finally someone heard that cranberry juice clears you up and so everyone was drinking the stuff all day, I’m not sure if it worked.

In my mid 20’s my friends father was nice enough to make me a shabbos cookie with marijuana in it. I duly ate the cookie before Friday night dinner and then proceeded to eat this amazing meal at which point I started doubting the potency of marijuana in the first place, was it all just people pretending to be nuts? The suddenly, my face fell flat into my food and I couldn’t think, strange things happened that night and I remember waking up completely high. I still hadn’t smoked anything – including hookah and cigarettes.

Sometimes people couldn;t handle the fact that there was one dude who wasn’t partaking, I was accused wrongfully of being anti-drugs, a party pooper and too scared – but I really had no interest. I still don’t have much of an interest, sure, if someone has some good herb and they’re passing it around at a concert – I’ll take a hit or two, but I have never bought any herb or done much more than herbs and shrooms.

What irks me the most out of the whole thing is how frum people assume you can’t be frum and smoke a little herb now and then, in fact I know one guy a certified stoner (he gets it legally for medical purposes0 is having a heck of a time finding a shidduch because he openly states that he needs someone 420-friendly and all these people assume that smoking weed is against the torah or something, when cigarettes and alcohol are probably a whole lot worse for you in the long run.

I haven’t smoked much since I took my first hit at 27, but once in a while sitting with a group of good old friends reminiscing it’s nice to get a shtickel high. I am definitely happy I waited 15 years longer than my peers to hit the bong, taught me a lot about peer pressure, leaders and followers.