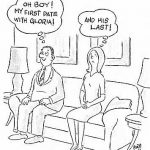 To set up that is, I’m constantly thinking about people I can set up and I have come to the conclusion that girls are so much easier to set up than guys. In fact, while checking my hot bod out in spandex today I was thinking that the shidduch crisis may be more about the lack of guys who actually go out, rather than the amount of them. I have loads of single guy friends, but they are all extremely picky, one won’t travel more than 20 miles to date, the other only wants a supermodel and the next one isn’t really frum, but wants a frummy girl because she will understand the culture more. Then When I think about my lady friends and acquaintances I sigh because they are all quite easy to set up, give me a guy with a pulse and a head on his shoulders.

It’s starting to bother me when I meet guys who aren’t getting any younger who are so narrow minded when it comes to dating. I know, not everyone can be like me (I don’t really date – so I don’t have such issues) but even if I see a picture I don’t find particularly flattering I will still give it a shot – most guys think I’m nuts for this philosophy, but I look at dating for marriage like New York State looks at the lottery – “hey you never know.”

Sure, the ladies want a hottie too, but they are easier to get to go out on a date, come to think of it – only two of my friends have ever gone out with girls I tried to set them up with and one of them married the girl, so I’m 1 for 2 in shidduch making statistics.

Whenever I tell a girl about a guy I think might be good, it seems like they have already said yes, but tell a guy the same thing and he needs to do a whole back round check and of course he needs a full body picture to make sure that she isn’t too fat, it’s a shame because I don’t want to appear like the scheming shadchan who sets up his friends with overweight girls, but how am I supposed to set up chunky ladies?

As sexist and sex driven as I sound, I’m much more about personality and passion than looks. The last girl I dated, I was not attracted to her for the first 3 months we knew each other and I used to call up my buddies and say things like “I wish she was hot, because she’s so cool” although this may be an argument against shidduch dating because it doesn’t allow for natural organic attraction.

66 comments for “Girls are so much easier than guys!”