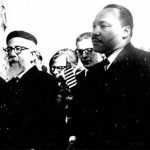 I know I’m a day late, but this question was posed on my FB page right before I went to work and 47 comments of bickering and fighting about whether or not Rav Meir Kahane deserves this title along with some of the other nominees really showed me how diverse an audience I have.

As usual I expected people to bring up the usual suspects for Jewish leaders that brought Jews together, although in my mind Kahane is the exact opposite of Martin Luther King, it was interesting to see the other nominees for the Martin Luther King of the Jewish world. These included several votes for Abraham Joshua Heschel, Moses Mendelsohn, Rabbi Joachim Prinz, Shlomo Carlebach, The Lubavitcher Rebbe, Dov Hikind, Hillel HaZaken, Rav Kook and Yitzchak Rabin.

Below are several of the longer interesting comments on the post:

There is no exact comparison to anyone in our history. The closest one I can think of in the modern Diaspora would be Abraham Joshua Heschel. But I think a better analogy might be Yitzchak Rabin, obm. He embodied and embraced many of the id……eals of King such as peacemaking with one’s declared enemies, pride in one’s heritage, and social programs for the poor. He also paid for it with his life. Of course, Rabin was the leader of Jews in their homeland, while King was (arguably) the leader of a major African diaspora community, the community of African-Americans. So it is difficult to make the comparison between the head of a nation struggling to make peace with its longtime enemies and a major leader of an ethnic and racial minority living in diaspora conditions attempting to gain some measure of civil rights in its forcibly adopted homeland. But the parallels are striking, the more that I think of them.

Why Kahane? This comment triggered a lot of rage for good reason…


Harav Mair Kahane promoted Torat Yisra’el as Torat Yisra’el, not that watered down, hijacked “Torah” that “Jews” pass off as “religion”. MLK called on African Americans to be strong, proud, assertive African Americans. Kahae called on Yisra…’elim to be strong, proud Yisra’elim. Having known his mother and brother, and having read his books, I’m far more more qualified to make that assertion that all of the “Jews” who jump on the pseudo-intellectual “hate, racism, bigotry” bandwagon.

And someone who got really pissed at the whole conversation:


I’m truly shocked and saddened at the stupidity of my fellow Jews …WHOMEVER said Rav Meir Kahane ,Rav Shlomo, Moses Mendelson, The Rebbe , Clearly has no what the hell they are talking about .

1. MLK = “Peaceful resistance at all costs”… “All Men Created Equal” ECT.
2. Rav Meir Kahane = “Democracy and Judaism are not the same thing” , if all else fails armed resistance is necessary
3. Moses Mendelson – Dude Seriously? His own Children “converted” to Christianity.
4. The Rebbe- Are you Insane? Arguably one of the greatest People in all of (Jewish) History, and the world, but Comparing Him to MLK? That doesn’t even make sense.
5. Rav Shlomo Carlebach – Ok. Now you People are on Crack. Clearly Rav Shlomo was one of the greatest Rabbis of the 20th Century, but how are you going to compare him to MLK? In what way?

Please don’t misunderstand , I huge fans of all of the above (Besides Mendelson) The Bottom Line is … While all of the above were way Larger than Life in so many ways , Not one of them united all Jews under one banner , Not one. MLK set the example for us all, and us being a “Light Unto the Nations” Should be embarrassed that we do not ascribe to his way of thinking …. How Come Not One Gadol Hador ever said that Racism is Assur ? Not One …..

Ok, I’ll bite. My vote goes to Moses Mendelssohn, the leading advocate for enlightenment, haskalah, and emancipation. Mendelssohn advocated a world in which the state would be neutral regarding religion, and religion would not have any state powers of enforcement. For better or worse, we all live in his world now.

← Propaganda or just plain old cool?
I slept through schachris on my mothers yertzeit so God screwed with me →

75 comments for “Who was the MLK of the Jewish world?”