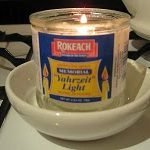 Every year around this time I get a call from my old man reminding me about my mothers yertzeit so I make it to shul to say kadesh. Being a cook doesn’t make things any easier when it comes to getting up in the morning or actually making it… to shul. Last night amidst an insane dinner rush (half a dozen tickets deep) I had to run out for maariv, but when my alarm went off this morning I didn’t even hear it and was jolted awake an hour after it first began buzzing, I felt pretty crappy to say the least. Crappy because I had just missed a chance to say kadesh numerous times to honor my mother and to bring some scotch to shul so we could make l’chaims (what’s the point of this practice anyway) and sit in rush hour with a buzz.

God knew this would happen, he planned it all in advance to make the entire day relatively miserable. At about 11am one of the servers informed me that it was the nicest day in months outside and I was missing it due to a last minute schedule change. I was tired and had a ton of stuff to make, Ceasar dressing, lemon vinaigrette, apple chardonnay vinaigrette, tabouli, candied walnuts and mini apple pies amongst my regular line cooking duties. Then at 2pm I was informed that I could make a delivery which would take 15 minutes of my time and earn $54 cash – but it would have to be done at the exact same time as mincha and as I debated it in my head I looked up at the lord and wondered if this was my kapara for missing shachris that day. I went to mincha instead of making mad dough and going mountain biking – I did get a 16 mile ride up Los Gatos Creek bike path in, but alas I got to say kadesh at mincha and learned some pirkei avos in my mothers memory – may her neshoma have an aliyah.

← Who was the MLK of the Jewish world?
Are bloggers good for the orthodox Jewish community? →