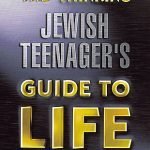 I get bored in shul and to tell the truth I usually grab a stack of those artscroll propaganda biographies of various gedolei ha-previous dor. I can honestly say that no matter how trumped up the stories of famous Rabbis like Yaakov Kaminetzky, Yitzchok Hutner and Moshe Feinstein are – I truly love them, but this shabbos I was in a mussar mood and I picked up The Thinking Jewish Teenagers Guide to Life by Akiva Tatz.

I leafed through it for a few moments until I found what I was looking for, want to guess which chapter I read first and intend to make fun of here? Of course it was the sex chapter, which in this case was about the relationship of man and woman and seemed to be written for older folks rather than younger folks, because in all honesty it was way too mature for teenagers.

I always hated it when Rabbis would try every which way to skirt around using the word sex, it bothers me because only frum kids understand this, but when you have a generic audience who don’t know the subtleties of rabbinic avoidance when it comes to anything remotely sexual – how is someone going to know that “knowing” someone of the opposite sex means you’re sleeping with them?

What can you expect from an Artscroll book? Of course they can’t just come out and say that sex without marriage is wrong, so they decided to devote an insane amount of pages to tell you this. That’s what happens when you have to circumvent being too obvious in the sake of tznius. So he decided to compare secular and Jewish relationships with a baby who doesn’t want to eat bread unless his (the entire book is written for men apparently – because it always says he or his) mother spreads honey on the bread.

The sex or in this case, relationship is the honey and the torah lifestyle (marriage, kids and insanely high food prices and tuition bills) is the bread. In the secular world they want the honey without the bread and in the Jewish world, we are willing to take the bread with the honey. In all honestly it’s a fairly good interpretation of pre-marital sex. He could have just said the classic line “why buy the cow, if you’re getting the milk for free?” Maybe he viewed milk as a tad more sexual than honey, although I would argue that honey is way more untznius than milk, mostly because Honey Pot is way more sexual than milk (unless you’re talking about breast milk, although in my mind there is nothing more unsexy than seeing a woman breastfeeding in the rabbis office during musaf)

Don’t get me wrong, I actually like book, I have to say that his talk of faith, blind faith and faithfulness prompted me to actually borrow the book from the shul, but his talk about sexual relationships was so glossed over it reminded me of something a friend of mine said recently. He said that his biggest issue with daas torah (he lives in the West Lawrence area and is fairly yeshivish as well as intellectual in reading and education) is that they never talk bluntly about modern issues facing modern people, they never talk bluntly about drugs, sex and rock and roll – they are like the public schools who wanted to ban condoms because they were thought to promote sex.

Anyway, I just figured that if Akiva Tatz or any other frum author was a little bit more direct, it may help a lot of kids feel more comfortable in their conflicts about religion and life.

67 comments for “The thinking Jewish teenagers guide to life”