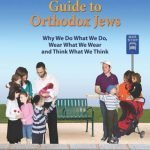 Forgive me because I forgot who sent it to me, but someone sent me the cover of Rabbi David Baum’s book the Non-Orthodox Jews’ Guide to Orthodoxy and I was struck by how frum the couple who was supposed to be non-religious on the cover looked, they were looking at a charedi couple – but in all honesty they appeared to be a frum couple on vacation. Big deal, it’s just a book cover right? Well I decided to do some snooping about the book and it appears it is just another kiruv pamphlet in disguise, except this time it makes some pretty sweeping generalizations.

I cannot say what is contained in the book based on forums like hashkafa and Im a Mother until I actually take a look at the book, but lets just say he is a new reason for me to keep writing my book which in my mind is to be something like “an insiders look at orthodoxy” “an unorthodox look at orthodoxy” or “Frum Satire’s guide to life” – yes I’m sure I could be more clever, but hey you never know.

Like most writers who do other things besides write full time, I become easily distracted by things such as good weather and blogging, but alas I have a document that is 25 pages long so far – I have decided to compile one big newly written document full of every idea I have ever written on subjects like shomer negiah. Kiddush, davening, mechitzas and shidduchim – then hopefully at some point I will sit down with someone and work on producing some sort of coherent document that can be turned into a book. I feel like finding a ghost writer or someone I can dictate everything I know would be much easier, but alas I do not know anyone who is willing to do this or knows how. So I continue to write every once in a while and then get daunted by the overwhelming task and give up for lack of inspiration, only to get re-inspired by things such as this.

Google this book and take a look at the talk on the forums, apparently he thinks that all secular Jews are a bunch of sex crazed drug addicts and that every gay person is a sexual molestor – sound like my rabbis in high school actually.