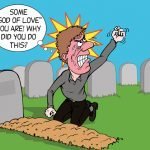 I’ve been thinking about God lately, really since I realized this past Friday night that I had missed rosh chodesh shevat completely, like I had no idea that the event really went down – that’s the domino effect of coming late to shul, missing the biblical commandment of blessing the new moon and then failing to go to shul all week.

I usually come late to shul on shabbos, not because I have trouble waking up, but because I like to come around laining time so I can catch up during laining which allows me to half assedly listen to laining, read the chumash and do my davening all at once. To put it bluntly, I have trouble sitting in shul, I know, my shidduch market value has plummeted from its already low market value to the hinterlands of below zero. It’s the truth, I really don’t do shul, I feel that Hashem specifically granted me observational skills so I would have something to do in shul other than make up mechitza jumping fantasies in my head. Instead of thinking evil thoughts during shul, or talking to my neighbor I can now just get a chuckle over the way different people shuckel (which some, including the owner of Carlos and Gabby’s, think to be a chillul hashem)

So where was I, mechitza jumping, shuckeling, oh yeh – God, that big guy (gal) up in the sky and everywhere it seems that in my mind is controlling all. On the way to work this morning (turns out I was working night today) I was thinking about the folks who don’t believe in God or any type of higher being and how much that much suck during crisis, inexplicable events and when you really need someone to blame for your stupidity.

Like yesterday I was mountain biking and it rocked, I was muddy and marveling my sexy figure in my sleek black spandex tights when suddenly this feeling of gratitude came over me. The trees were lush, the sun lingered on the redwoods in the right way and I just had to bust out a mincha right there, I was instantly transported to this special place – just me and God chilling in the woods and giving thanks. Now what on earth would I have done without God, who would I have given thanks to? Would my gratitude at being alive and all of my muscles and limbs working properly have just gone up in smoke? I’m sure you atheists have an answer, but God works for me so why not? Judaism on the other hand, I’m a bit of a skeptic, but it still seems to work, I enjoy the life I live despite being fraught with questions and wonderings.

So God is good man! I’m down with God, who else would I be able to blame the good things or bad things happening in my life. I’m of the opinion that life is a series of revelations that smack you in the face and you wonder why you never felt that way before, life without at least being convinced of the afterlife seems to be pretty scary. Doesn’t kill you to believe, although I keep wondering if when we get up there, God is going to laugh his ass off at us for following all of these man made rules and stories.

I personally couldn’t live without the Lord, no matter what, but it pains me when he doesn’t enter my conscience – such as last week – last week was a bit Godless. Sure I davened three times a day, wore tzitzis, said my brachos and washed negel vaaser in the morning – but that doesn’t mean that I was surrounded by God. I may be the proof that wearing a yarmulke, tzitzis and davening three times a day won’t actually bring you closer to God – there needs to be something more. You can keep basic halacha and do your thing and still not have God. God isn’t an automatic, I don’t think I truly spoke to God until my mid 20’s. I believe that most people rarely speak to God or even acknowledge his presence, sure, when that guy next to you is violently shuckeling and pounding his fists on the shtender he may be speaking to God, but what about during general times, not during times when you’re supposed to be speaking to God. I myself don’t always talk to God during shemona esrei and davening, I merely mumble words and try to get through it.

Talking to God isn’t as simple as it seems, especially when you talk to him at random, not when you need or want something, not even when you need to give thanks. I’m a big God talker and it bothers me when I go a day without randomly acknowledging God’s presence for no reason other to recognize this force in the world. Acknowledging God also helps with your troubles, the more you think about the force, the more you think about histadlus and the more you lack depression or worry – the tyranny of the mind has less control over you.