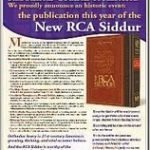 Matzav.com has got one thing going for them, they love writing long attacks on people who aren’t frum enough for them and I love it. Who would have imagined such vitriol for a revised siddur, I wonder what they will do if Artscroll ever decides to “update” their shas sets.

Keeping mesorah has always been a challenge for Yidden in golus.  The lure of secularism, conservatism, socialism, and a whole gamut of “isms” is an enticing one for those who are influenced by current society to perceive traditional Ultra-Orthodoxy as “old fashioned” and “outdated.”  Personally, though, I am simply bothered by “other” versions of Judaism. I am not offended by them.  If someone, for example, is Reform, then they have left the fold, and by giving their pseudo-observance a new moniker, they are distancing themselves from Torah-true Yiddishkeit in the process.

What is really troubling is when people hijack Orthodox Judaism as they tailor it to fit their own sense of what is right and wrong.  They threaten to alter Yiddishkeit from within and conveniently keep the term “Orthodox” to suffice their misplaced sense of staying “frum.”  We all have heard about the Avi Weiss-Rabbah fiasco, and how a perverted sense of equality for women required an update from the supposed tyrannical ways of what Torah, halacha and mesorah have prescribed as women’s roles for millennia.  He was condemned. She was condemned.

However, I believe that in order to be protective of our ever increasingly threatened Mesorah, the facilitators of these attacks should be just as equally condemned. The RCA openly expressed their disapproval of Avi Weiss’ actions. Yet, they did not go so far as to rescind the ordination given to a woman, nor did they have the wherewithal to distance themselves from Weiss unequivocally. To me, that speaks volumes of the RCA’s position of how Orthodox Judaism isn’t above being tinkered with. They just took issue with the particular type of change that Weiss initiated.

As advertised, the RCA is planning the release of a new siddur. Rather than letting their changes to the most basic form of our service to Hakadosh Boruch Hu be discreetly positioned, they proudly declare how the “Revised RCA Siddur” will be a new and more updated version than its predecessors. It will promote increased “sensitivity throughout to women’s prayer experience,” including incorporating prayers (such as “Zeved Habas“) that are specifically altered to be gender appropriate, presumably because the siddur that Klal Yisroel had been using is terribly insensitive to women.

Additionally, it has “halachos related to contemporary history,” such as new days when to omit Tachanun or say Hallel, because since the Shulchan Oruch (and the Mishna Berurah, for that matter) did not live in the latter part of the 20th century, they were not privileged to be enlightened to extra holidays on the Jewish calendar that the RCA and others have added. Sarcasm aside, the RCA has also taken the liberty of changing many words in the text of tefillos to adhere to what they feel is more grammatically suitable.

The RCA is the perpetrator of this heinous attempt to modernize our mesorah, but as with the case with Avi Weiss, they are not alone, and they need facilitators. As of now, the siddur is billed as “Zichron Ploni” as they await a generous benefactor to enable its publishing. In addition, there is also a publisher, a distributor, local seforim stores, and news publications for advertising that are required for RCA’s new revised siddur to be “successful.” Unless the RCA is willing to make a turnaround and omit these distortions in its siddur, which we hope it will, I call on those in that industry to distance themselves from that project, and if they do not, then they are coconspirators of the sabotaging of our mesorah as well. To paraphrase political commentator Rush Limbaugh when referring to another “progressive” change movement: I hope they fail.

There is another thing that caught my eye in the RCA advertisement that I saw as ironic. It proclaims that the “Revised RCA Siddur will enhance the prayer experience for decades to come.” With history as our teacher, we know how all of the movements and “isms” have panned out, and in the “decades to come,” only the undiluted version of mesorah-guided Yiddishkeit will endure.