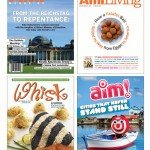 I recently heard of a new frum magazine called Ami that was set to hit heimishe newsstands sometime around Thanksgiving, I had heard previously that it was supposed to be a magazine for the entire Jewish world, hence the name Ami which means nation, but after reading the second issue cover to cover I have decided that it’s just another yeshivish magazine trying to compete with mishpacha magazine, by being a tad more modernishe. I hesitate to use the word modern, because Ami is definitely not modern orthodox.

I am not out to bash the magazine, I should state right here that it is filled with good articles and good writing, I didn’t find it very interesting, thought provoking or provocative, I did find one article I really liked about the folks who collect antique seforim and I was a bit shocked to find Rabbi Avi Shafran of Agudas Yisroel saying nice things about President Obama, (Eliyahu Fink tells me that there’s a bit of a backlash from this piece on Cross Currents) but beyond that it seemed to be a very similar magazine to mishpacha, minus any talk of shidduchim and obituaries of chassidshe rebbes.

I could tell immediately that Ami was trying to mask it’s frumness, the cover features Rabbi Menachem Genack CEO of the OU standing with Bill Clinton and Joe Leiberman and the article about Menachem Genack talks quite a bit of The Rav (J.B. Solevatchik – one those people who the yeshiva world views as knowledgeable, but will never name a gadol or give any true recognition to, despite the famous picture of him sitting between Rav Moshe and Rav Ahron at some conference)

Further along into the magazine was an article by Rabbi Avi Shafran as mentioned above, about the good things that Obama has done for the Jews. The article is classic in that it lists off a bunch of seemingly good things that a president has done leading you to believe it was someone other than Obama and then Rabbi Shafran shocks the frum reader in that all of these good things for religious Jews and Israel were done by Obama. He then talks about the frum communities general hate toward the man and how he finds it hard to believe that many frum people would not rsearch properly and find out good things about him. Of course he knows why, because if you’re frum you generally vote straight party line or whatever Rush tells you to do.

All of this aside, I started taking a closer look at the magazine and I realized that it looked almost exactly like mishpacha magazine, almost down to the font, style of pictures, types of articles, it really was like a yeshivish modern version of Mishpacha. One article was about moving to Chicago, it talked about the tzniusdicke clothing stores, other heimsihe establishments and at the end of the piece where it talks about the cost of living guess what costs they used to determine the cost of living. Home prices, yeshiva tuition, a gallon of cholov yisroel milk and grape juice – because the price of grape juice generally affects people’s decision to move to one community over another.

The magazine also has no pictures of women, hardly any articles written by women and the sales managers name is Frumi, any magazine with someone named Frumi on staff has to be pretty frummy.

I had to google the responses that different folks have to the magazine, which I welcome because although it’s almost exactly like mishpacha, it’s less in your face frummy and it reads better and competition is a good thing, but I found some interesting stuff about Ami Magazine on the internet.

When I asked my Facebook friends for their opinion on Ami, one of the commenters said that he heard through the grapevine that Mishpacha had to tried to convince distributors not to carry the magazine and it’s kind of ironic that when I googled them I found out one of their head people used to be the head editor at Mishpacha Magazine and she left for some reason (I wonder what the conspiracy over that is?) I then found out that almost everyone thinks that Ami Magazine is an almost exact copycat of Mishpacha (I didn’t see that it came with a woman’s and a kids magazine just like Mishpacha) and there’s two debates in the yeshiva world news coffee room between whether or not this is a good or bad thing and if the magazine is good or bad in its own right– it’s fairly obvious that half of the commenters work for Ami and are relishing in this free advertising.

Seems like the frum magazine world is going the way of google, just like former googlers (common term for folks who work for google) go and start their own companies, a bunch of former editors for Binah and Mispacha magazine have started their own magazine. The only problem I have is that it seems they didn’t have enough collective talent to think of their own design or a new way to approach the Jewish community and have merely taken to trying to compete with their former employer, but it’s a fun frum conspiracy to write about and I’m sure Ami will provide loads of fodder for me in the coming issues so I wish them good luck at their endeavor.

57 comments for “Ami Magazine: My thoughts on this frum conspiracy”