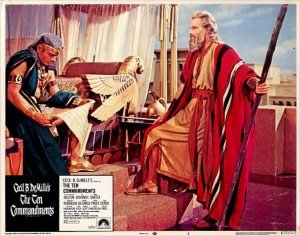 The concept of the Ten Plagues is a difficult one to understand, and I refer here to the theological issue that arises from what is clearly stated in the early verses of Exodus — God promises to harden Pharaoh’s heart, thereby bringing about a greater destruction upon Egypt (Exodus 7:3).  How can we reconcile this with our claim that the God of Moses is an omniscient, benevolent God who is merciful, slow to anger and abounding in kindness (34:6)?

The episode of the Ten Plagues is a fascinating one.  Superficially, it appears very repetitive, which is why DeMille’s Ten Commandments skips most of them.  Moreover, Pharaoh’s game becomes really dull really fast — “I know!  How’s about I tell Moses that I’m really sorry and then when he comes back, I’m tell him I changed my mind…HA HA FAKEOUT!!!”

But for those paying attention, the recount is actually filled with lots of subtlety.  As picked up on by the Midrash Tanchuma (Veira 3), there is no direct mention of God hardening Pharaoh’s heart during the initial five plagues.  Other than an introduction to Moses outlining the entire plan (7:3), the verses merely state that Pharaoh’s heart was hardened, with no mention of God actively hardening it.  Now that’s quite understandable — imagine yourself as the Egyptian ruler with tight-fisted worldly power and alleged holy might (divinely-mandated, of course) and members of your slave nation present themselves unannounced to demand a complete work stoppage so they can host a holy BBQ in the wilderness — I think I would also send them packing (and I don’t mean for their requested vacation).  Then they come back and show you the oldest snake tricks in the book, and they keep coming back promising wrath, fury and a band of emissaries — I mean, who are we kidding here?  I think we’d all laugh at a Moses, too.

But then plague #3 comes and turns out to be a real eye-opener, and Pharaoh’s advisers are abruptly no longer on board — they can’t find this stuff in 101 Easy-to-do Magic Tricks or The Complete Idiot’s Guide to Street Magic, and they suggest he concede (8:14-15).  But he holds out just a little while longer, until the sixth plague, when all of a sudden, it appears as though Pharaoh’s free will has been possessed (9:12).  From then on, the game speeds along and even the free will of the Egyptians appears hijacked (9:34-10:1), and suddenly it doesn’t seem quite fair for Moses to charge them with lacking fear of God (9:30) when the verses clearly show evidence of them being railroaded into this; henceforth, the verses refer to God actively hardening Pharaoh’s heart.

In the opening of Bo, immediately prior to the locusts, we see a magnificent turn of events — Pharaoh’s servants are no longer stupified.  They complain that Egypt is being destroyed, but Pharaoh continues his sport, calling in Moses to feign apology.  But Pharaoh’s still under the spell (10:20, 27, 11:10) — how do we accept such palpable divine obstruction of Pharaoh’s free will?

I’d say we can all agree with the premise outlined above relating to the initial plagues — any one of us would have stared down Moses in the beginning.  But when the unlikely reality of a supreme deity endorsing the Jewish slave nation becomes nothing short of unquestionably verified, what’s the human capability on the part of Pharaoh and his cohorts to make a free will decision to either accept or deny the truth?  There is none.  Consequently, in order to provide Pharaoh with the free will to make a real choice, God had to strengthen his resolve to astronomical proportions — and Pharaoh failed the test, and that’s why he was punished.

And there was no game — Pharaoh was truly battling his evil inclination.  When he was with the wild animals or the locusts in the foxhole, he realized the error in his ways, but when they were gone, he lost perspective and changed his attitude.  And Moses was not being consistently duped — all along, he was keenly observing this vacillating wave of indecision, and with Pharaoh’s first admission of guilt (9:27), Moses merely tells Pharaoh that he’s fooling only himself, because he does not truly possess the yiras shamayim essential to perform adequate teshuva.