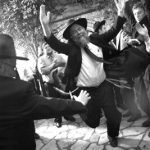 A couple of years ago I was at this purim party in New York City that was highly advertised on Facebook as having free drinks and no cover. What Jew could resist two free things and the possibility of getting some action as well, I am not into clubs, I generally don’t enjoy the dance styles (dry humping with clothing) practiced at those establishments. Growing up frum I never learned to dance with girls anyway and even in the few instances I could have I always wondered about the dance floor boner situation – later on in life I learned to cope with this embarrassing “more common than you think situation” according to women I have spoken to.

So I went with a couple of friends to this club near Alphabet City and we drank free vodka and cranberries until they started charging people for them, clever of us to show up on time, because all the cool people who showed up late were in for expensive drinks. At one point I found myself being pulled onto the dance floor where I busted out the moves I learned from watching Micheal Jackson videos on MTV growing up. All I really remember was being sandwiched between two very nice looking girls from the five towns and hearing one of the girls say to the other “who would have ever guessed that Frum Satire could dance?” It would have been funny even if I was sober.

You know how they say everything leads to mixed dancing, I can pretty much gauruntee that if you go to a sleazy Jew party in the city on Purim with free drinks and loud music that it will lead to mixed dancing, but one may say that at least we put ourselves in a Jewish situation so that we were technically in the clear if we were dan l’kav z’chus that everyone in the room had gone to the mikvah beforehand to ensure halachially legal mixed dancing.

So I can sort of dance, I used to be really embarrassed to bust out my white frummy moves on the dance floor at concerts and would gently bob my head and air guitar if the mood called for it, rarely would I thrust, gyrate or bounce to the groove. Then one Saturday night in Rochester NY at a Addison Groove Project show I discovered funk and there is simply no way you can attend a funk show and not want to dance. Not only did I dance, I felt good about dancing in a crowd of funk, jazz and jazz band folks who all seemed to “not know what they were doing” and it was then that I discovered the natural urge to dance regardless of how you appear to others.

If you attend enough jam band shows you realize that hippies are even worse dancers than frummies and they only have one or two dances, but I’m sure they could hold their own in a slow dance, while we yeshiva educated folks have no idea what to do.

Why should we know how to dance, you can’t really dance with the ladies and when you’re married, I have heard rumors that many frummies don’t go out dancing with their wives – I kind of looked forward to getting married and going out dancing with my wife, because then maybe I’ll have someone who can show me what to do, how to lead and all that jazz.

I got thinking about how frummies really don’t know how to dance with the opposite sex because My Jewish Learning has this new video with comedian Myq Kaplan talking about his parents enrolling him in a dance class so he wouldn’t look like an idiot at bar mitzvahs, but he never gets to use his moves and thank God no one ever got to see my moves at a bar mitzvah.

← Bans are like Terror Alerts – no one really cares
I will survive circumcision: Did you have bris late in life? →