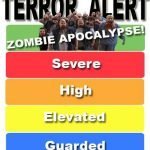 I remember the days right after 9-11, I was honestly excited that the world was going to come to an end or be forever changed, unfortunately the only thing that proceeded 9-11 was high gun sales and even higher gas prices. We did get some new things of course, most memorable, The Patriot Act and the official terror alert thing which seemed to be stuck at orange or red.

I remember when we would have Fox News or CNN on at work and how excited we got when they raised the terror alert level, we all wanted to world to come to an end, or least drastically change and a terror alert being raised from orange to a reddish orange must mean something was up. Eventually the years passed and no one noticed that there was still this terror alert thing. Once in a while at the airport I would notice the familiar monotone robotic female voice say that the Homeland Security Terror Alert was at orange, it never seemed to go up or down and after a while I wondered if anyone cared.

In the 4 1/2 years that I have been writing this blog I have picked up on the many things that the Rabbis (when I say The Rabbis, I refer to whichever group of rabbis was convinced by others to ban something) have decided to ban, things like vacationing in Miami Beach, going to the Lipa concert at Madison Square Garden and buying wigs from that store on Coney Island Avenue across from Chaim Berlin.

Through the years, I have come to realize that no one cares if something was banned, in fact bans probably undermine the power that the rabbis had in the first place – if they would have stuck to real paskening and real decision making maybe people would have listened, but when you start telling people that you cannot attend a concert or wear a certian wig brand, it seems to be getting a bit personal.

Rabbinical Bans, like terror alerts, seem to have become something that is made fun of – but rarely listened to. Seems like the only thing that Bans do, are to provide me with material and give other folks more excuses why to tell loshon horah about the rabbis who ban things.

Although, one could make the argument that bans are good for business. If this blog were banned in a similar fashion to the way Vos Iz Neias was banned, I would be famous and cool, it would also create some good traffic for me. So How do I get my site banned? Cherem would kind of suck, but having a website banned is cool!

← Are you hot for frummies?
Frum Jewish Boys can’t dance →