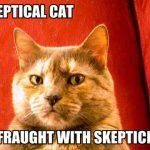 It’s been a question on my mind for sometime, but I have refrained from writing about it because I am not a philosophically in tune guy, I don’t read philosophy much and when the comments section fills up with A. Nuran, Yankel and FrumGer going at it with this philosophical arguments I generally tune out, but I am a skeptic, have always been a skeptic, but only recently have I started to admit to myself or to anyone that I was a skeptic – though anyone who has read this blog for the last couple of years could see that.

Many skeptics I know took the approach of abandoning much of their practice while they searched for the answers, but I am very against this. I believe in much of what I do and much of what I do satisfies me in a cultural, structural and spiritual way. I enjoy being a part, albeit on the fringe of orthodox and I like the community and structure it gives me, but I still wonder about the whole thing.

My friends from yeshiva, many of whom did their times off the derech or are still marginally orthodox, are always amazed that I not only stayed on the derech the whole time, but by the simple fact that I always fairly religious – I have always davened three times a day, gone to shul at least on shabbos and kept kosher, despite the evil things I have seen and the things I write about – I am a firm believer in judging the religion by the people practicing it, because rarely are the fundamentalist the majority – although orthodoxy itself is quasi fundamentalist.

So I do my thing, learn some torah, get up for shul, give tzedaka have conversations with God about his awesomeness – all the while questioning his intentions, whether or not any religion is the right religion (I think I may just be a frum agnostic sort of) and wondering if I can take on the Dutch minhag of milk and meat and if he actually cares about it at all. And you know what? It’s making me stronger, it’s giving me more faith and forcing me to consult with the lord more often.

The Rabbi in Oakland happen to speak about how popular Atheism and skepticism is good for us Jews this past shabbos, it keeps us questioning and it keeps us on our feet he said, you people would have loved it – Rabbi Darduk has this way of defusing controversial topics and making them accessible. He gave us the different opinions of other Rabbis when it comes to reading and listening to Dawkins and Hitchens, how it doesn’t really tall about Judaism and seems to be more of a response to Christianity and how in the end – religion, evolution and the Bing Bang are all just theories that people like to pass off as fact.

I just like that he confirmed my thoughts and skepticism were leading me toward, not away from being a better and more fulfilled Jew. It’s not for everyone, some people can have blind faith or they just know, but I don’t just know, I just just take it in and gobble it up, I chew my cud and wonder and although it doesn’t drive me crazy, it drives some folks crazy and just abandon it because it’s too hard to deal with.

← Sometimes I am amazed at my own power
Are you hot for frummies? →

197 comments for “Does skepticism help or hurt religious Jews?”