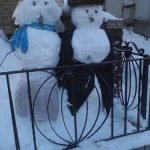 The recent New York Blizzard has made a lot of problems for people, folks couldn’t get to work, couldn’t get out of their cars and couldn’t get to shul, but apparently the worst of the problems may be for people in shidduchim. It was quite obvious that the snowstorm would create problems for folks trying to marry off their children, but when shadchanim started to ask about whether or not the boys were going to yeshiva during the snowstorm, it set off the storm of its own within the shidduch world.

Rumor has it, that many parents were scared to let their children attend yeshiva during the snowstorm, after seeing videos of snowplows crushing cars, they feared their children would be next, but many shadchanim wondered if their mesiras nefesh was so low that they didn’t have enough faith that God would protect those risking their lives by walking through deep slush puddles to do a mitzvah.

The snowstorm is kind of like the shoelace shidduch thing. In order to see the character of boys many parents of girls ask whether or not the boy wears shoes with laces or slip on – this tells the mothers whether or not the boy is lazy. Using slip on shoes proves the boy is lazy and is uncaring, but using laces may be seen as a waste of learning time. So to, the snowstorm has been seen as a double edged shidduch sword. On the one hand, going to yeshiva or seminary may be seen as a real risk to do Gods will, but on the other it may be seen as a foolish risk when they could have learned at home.

Unfortunately, many boys and girls did leave their homes to venture out in the snowstorm and there has been lots of shidduch loshon harah going around about who saw who outside and what exactly they were doing. Luckily the skirts best suited for snowdrift walking happen to be the frummest skirts.