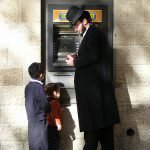 When I first heard about the kabbalah ATM I thought it was just another Jewish prank or satire piece, not sure what it was making fun of, but it sure sounds stupid. You insert your credit card into an ATM and input some personal data and out comes a printed receipt of your kabbalistic powers – sounds like complete madness to me, yet such a thing actually exist.

Not only does it exist, it’s been placed right near the Ari’s Shul in Tzfat and it costs 120 shek to get your reading. This seems worse to me than being duped by fortune tellers and tarot card readers, at least with them – you get the experience of sitting in front of the crystal ball and being told your future.

The ATM works simply: visitors insert their credit card, type their first name and their date of birth according to the secular calendar, and like an ordinary ATM that prints out a bank statement, the Kabbalah ATM prints out within a matter of minutes a page with the Kabbalist explanation of the user’s name.

“The explanation gives details about the special powers of the person, special qualities of their personality and their soul,” explains Eyal Riess, the director of the international Center for Tzfat Kabbalah, “this is based on the teachings of Kabbalah that are thousands of years old. All we did was to come up with the connection to modern technology. The novelty is that nobody has to go to us, anyone can walk in the Old City and get the explanation by self-service.”

Riess said that the matter was a relatively simple development that combined a number of programs already on the market.  “One program is a program for searching dates—when a person types in the secular date, the program finds the Hebrew date,” Riess explains, “and there is also a program that searches for the matrix of the letters of the person’s name in the Torah portion of the week that the person was born.  The third, and most important function, is the energetic meaning of each letter in the name as it appears on the tree of life. The model of the tree of life is 4,000 years old and appears in the original book of Kabbalah attributed to Abraham the Forefather with all the secrets of the creation, the soul, the letters of the alphabet, the zodiac etc.”

I myself am not too big on kabbalah, I prefer to understand the basic stuff of Judaism before I venture out into the hinterlands, how could I learn all about the spiritual craziness without even knowing shulchan aruch, but it seems there are quite a few folks who love kabbalah, including chabadnicks, bresslovers and the folks who have an inkling for chabad-bresslove and Kook at the same time – but would any of those folks be willing to fork over hard earned stipend cash to see their fortune printed on a receipt?