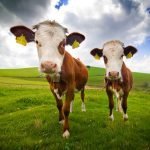 Some time ago, after making the mistake of peeking behind the white Styrofoam façade that shields us from the backstory of the animals we consume, I made the decision to limit my meat consumption to Shabbos and holidays. Little did I realize that my 15 years of Orthodox Jewish education would prove a more frustrating obstacle than double that time spent developing a taste for brisket.

Not far beneath the soil of every vegetarian or variant thereof lies a polemic ready to sprout forth; I may as well get mine out of the way. I have no particular love for live animals, and my relationship with them has historically been limited to eating the Kosher ones and viewing the Treif ones at zoos. However, after one of the Jewish community scandals prompted a torrent of research on the subject of meat origins, I became increasingly uncomfortable with prevailing industry practices, from both a Halachic and moral perspective.

Perhaps the simplest way to put it is that, while neither I nor Jewish law object to cutting the head off an animal because its body is tasty, there is no justification for subjecting an animal to unnecessary suffering. The Torah’s conceptualization of Tzar Ba’alei Chaim (cruelty to animals) calls for a model pursuant to which any suffering inflicted upon animals must be reasonable and justified and, as I see it, the right to pay lower prices for meat and poultry does not justify feeding a cow corn on a factory farm or housing a chicken in a cramped cage, when more pastoral options are available. I should clarify that it is not the moment of death, however gory, that concerns me, but rather the months leading up to it, during which animals are systematically made to endure unnatural stresses in the sole pursuit of keeping costs down.

Needless to say, this was not an ideal realization for a devoted carnivore, but, like a sausage that had erupted from its casing, it was not possible to stuff this back from whence it had came. However, no sooner had I undertaken to eat meat or chicken only on Shabbos and holidays (which, thankfully, comprise roughly 42% of the Jewish calendar), that the Talmudic questions began to bubble to the surface.

1) When cooking for Shabbos on Thursday night, was one permitted to taste meat dishes for seasoning purposes? On one hand, this was a clear violation of the rule, but, on the other hand, the Sabbath could potentially be dishonoured by the serving of an inferior dish (especially as I do not believe in adhering to recipes). If so, how much was one permitted to taste? A mouthful? A portion the size of an egg? An olive? Kalamata or Manzanilla? Must it be spat out, or may it be swallowed? Spitting would be in the spirit of the rule, but the injunction of Ba’al Tashchis (not wasting) is a counterbalancing concern. Perhaps one may swallow, but have in mind not to enjoy. The tasting could even be preceded by a declaration clarifying the ascetic purpose of the impending mouthful (one version for Ashkenazic Jews, and another for Sefardim, naturally).

2) Does Saturday night count as Shabbos? Does ceasing carnivorous behaviour immediately at nightfall demonstrate added respect to the Sabbath (only the actual Sabbath is enough to lift the restrictions of vegetarianism), or is the Sabbath honoured precisely by enjoying the remaining roast on Saturday night, as if to show that the aura of the Seventh Day endures even after its departure. In fact, is not the Saturday night meal known as Melave Malka (literally, “Escorting the Queen”) held specifically for this purpose?

3) What about leftovers (Saturday night according to the former opinion in the above paragraph, Sunday morning according to the latter)? Once again, the no-meat rule butts heads with the prohibition against wasting. Undeniably, it is neither ethical nor economical to throw good meat in the garbage or let it die a slow death in the fridge. Had I found a loophole, whereby I could prepare a massive amount of meat “for the Sabbath” and then eat it for the entire week to come? Would freezing Sabbath-prepared leftover meat cause it to lose its status as a Permissible Leftover, or would it be grandfathered even subsequent to defrosting?

While my Rabbis would no doubt be proud of me, what had begun as a clear-headed initiative had, over the course of a single weekend, been reduced in my mind to a cat and mouse game of stringencies and loopholes, of fences to guard the commandments versus tunnels burrowing beneath.

Formal rules and regulations seem necessary, lest observance devolve into a casual, self-determined mess. But, at some point, do the regulations take on a mind of their own. Does one lose sight of the ethics that the regulations were put in place to uphold, and instead gauge one’s morality simply by whether the regulations are being adhered to. Put differently, does the letter of the law subvert, or even replace, the spirit. How does one find the right balance of letter and spirit. More importantly, can I or can I not bite into this sandwich (leftover roast beef, caramelized onions, homemade mayonnaise) as I sit here on this Saturday night…

58 comments for “The halachavores dilemma”