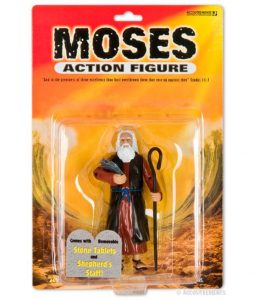 At the close of last week’s parsha, we saw Moses selected as God’s messenger to free the Jews from Egyptian bondage, and after an initial encounter with both the slaves and the enslaver, Moses already wants out.  The future seems bleak — God sends him on a task and he meets with nothing but disaster.  How will he persevere if even God’s plan can’t achieve success?  He questions the endeavor and then questions his appointment as the hero (Exodus 5:22-23), but The Almighty doesn’t back down.  He chose Moses for a reason and with Moses he will remain — but why?

Who is Moses that God should choose him for this important task and keep him even though he initially wavers?  If we accept the Torah as the true word of God, we take it for granted that Moses was the supreme leader of the Nation of Israel and the greatest Torah master to have ever walked the planet; he intimated with God like no other.  In Hebrew, he is referred to as Moshe Rabbeinu and, much like Jesus, his postfix is not his last name.

But all of that hasn’t happened yet, and so that can’t be why Moses was chosen.  Perhaps Moses was chosen because of his unique personal experiences.  He was the child of one of the leaders of Israel and yet was raised in the palace, only to leave the confines of luxury and become a shepherd.

The shepherd takes care of all the needs of the flock so that they lack nothing, as is so eloquently explained in Psalm 23.  Verse 4 of that chapter, however,  is a bit odd, as it puts together two seemingly distinct ideas: 1) that we tolerate potential danger, safe in the knowledge that God is supervising and 2) a rod and a staff comfort us.

The second phrase is strange even by itself, because it doesn’t appear to make any sense.  What’s a rod and what’s a staff, what’s the difference and why does King David think that they will provide any consolation?

When I was in Yeshiva University, we had to take an Intro to Bible course, followed by 4 topic Bible courses — one of my topic courses was Psalms, and that was my favorite, by far.  It was given by R’ Berger and of all the Psalms we covered, #23 was the most fascinating.  He claimed  that we misread the message when we split verse 4 into the two parts I did above.  Rather, he suggested the following: there is 1) an idea that God watches over us and 2) there is a “rod and staff” — and when we recognize that both 1 and 2 are really the same, we are comforted.

If anyone has seen the Moses action figure, one can clearly see the shepherd’s staff in his hand.  That long stick, as explained by R’ Berger, is used by the shepherd to strike the sheep when they misbehave by nibbling on private lawns or deviating from the path.  But when a sheep is about to slip down an incline or fall from a precipice, the shepherd uses the hooked end to grab the sheep and bring it to safety.  The beauty in this is that the rod and staff are one — it is the same instrument in the hand of the shepherd.  The metaphor is obvious — although we may fear walking through the “valley of death,” so to speak, we are to remember that God is with us.  And we do not have to fear that he is perhaps powerless to save us, because it is he who is providing the vitality for the danger.

So to reinforce this parallel, God chooses Moses the shepherd.  Now that’s not to say that all shepherd’s are rightful messengers of God — just check Google images for “shepherd” and you’ll see what I mean.  So suffice it to say that Moses had other traits and properties that were desirable, like his unique situation being raised in Pharaoh’s lap, but God waited until he became a shepherd in his father-in-law’s house and initiated contact while he was tending the flock.  Moses’ patience with the sheep would come in handy when he led the Nation of Israel.

And why did God insist on keeping Moses after he expressed concern at being chosen for the job?  Because he had been the instrument through which God’s initial move to set the Jews free had been blocked and turned on its head to make it appear as though the time of despair had plummeted to the rime of utter despondency.  By keeping Moses in the lead, God could fully reveal that all was from the same source…that the rod and the staff are truly one and the same.

← When did Torah Reading become a platform for important things?
The halachavores dilemma →