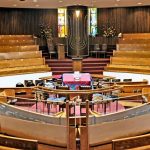 One of these days I will have to do an all out guide to the Jewish situation in the Bay Area, for now you can learn about the different types of mechitzas at the Bay Area orthodox shuls. The only problem with writing an honest guide to all of the communities is that everyone knows who I am and what I do, for the first time in my existence, pretty much everyone locally glances at my blog once in a while and this can create tensions when I write what I really think about some shuls, so for now I will concentrate on the important things, like mechitzas.

Emek Bracha: The mechitza in this Palo Alto shul is probably the best Bay Area mechitza for maintaining the allure and dignity of the ladies behind it. It is high enough to cover everything while the ladies are sitting and feeding animal crackers to their brood, but while standing up it gives an upper body view to both sides, a quarter of the bimah is located within the ladies section to give the occasional feminist a little more to work with and the mechitza isn’t overbearing.

Adath Israel: Located in San Francisco (Sunset district) this shul has two sanctuaries and both have very comfortable seating which makes getting up to look over the mechitza a chore – luckily it’s low enough in weekday sanctuary to actually turn around and get a look without getting up, while the main sanctuary mechitza is just high enough to block your sitting down vision unless you happen to be very tall.

The main sanctuary mechitza is about waist high, finished in a dark wood and paneled to keep it from rotting in the San Francisco fog. The mechitza in the weekday shul is a curtain standing on back of the seats, it’s a topic of concern for both parties since it doesn’t provide the privacy needed to really bust out that violent shuckel you’ve been wanting to do since getting home from seminary.

Beth Israel: The shul in Berkeley, affectionately known as CBI (sounds like a network news show or something) has a fairly liberal mechitza. The bimah sits right in the middle with doors for both the men and women to get up on to it. I guess giving the men’s side the wheelchair ramp may have bothered some of the bra burners, but I’m sure the ladies lainings during bat mitzvahs makes up for it. The mechitza is of wire mesh and allows for fairly uninterrupted sight for those wishing to gaze at the goods on the other side without getting up from their seats.

The weekday sanctuary which is home to the BEST shul library I have ever seen, doesn’t have a mechitza, I think they throw up one of those makeshift things that usually allow you to get glimpses through the slats.

Beth Jacob: Oakland’s mechitzah is the only carved wood mechitza in the area. It has a door to lead into the ladies section and is ample height to provide a separation without making it too obvious that the ladies are just in shul, because someone needs to guard the Kiddush from the kids. While sitting down there isn’t much of a view, there aren’t any single people in Oakland so looking over the mechitza isn’t something I did a lot of while at their shul anyway, although there are some super cute married ladies if that’s your thing.

Am Echad: San Jose is home to the only full “stare proof” mechitza in the area. A full length, floor to ceiling curtain makes sure that no one can see anyone of the opposite sex, unless someone is speaking, at which point (due to its out of town status – I’m sure the rabbi wishes to stop this practice) the curtains are drawn so the ladies can see whoever is speaking. I noticed that in the right light at the right angle, silhouettes are sometimes possible, but don’t worry folks, there is one single person in Emek Bracha over the age of 15 and he’s not into guys.

Chevra Tehillim: I didn’t really notice the mechitza in this San Francisco (The Richmond) shul because all I could think of was the fact that a shul with 900 seats could barely get 20 people on shabbos. It is tall and see through, but as far as I could tell there aren’t any people to look at – they have a balcony, but I’m not sure they ever use it.

The Mission Minyan: Only because their mechitza setup is one of the strangest I have ever seen, besides for the roof pit at Landau’s Minyan Factory on Ave L in Brooklyn. Located in the Mission in San Francisco, this shabbos minyan has three sections, in trying to uphold the laws of egalitarianism, they have decided to copy the Frummy concert mechitza setup. The middle section is for mixed seating, bordered on either side are two folding tables, on the other side of each are the men’s and then women’s section – strange indeed.

That about sums it up for orthodox shuls in the area, I have not been to the Sephardic shul in Sunnyvale yet. I have also not nearly visited all of the chabad houses in the area, many of them have makeshift mechitzas which are then taken down during Kiddush. The Berkeley chabad keeps those women locked in, the San Mateo chabad let’s you look at the whole package and Sant Cruz Campus chabad gives you the slat-mechitza effect.

← Hazon: You know it’s crunchy when I’m the cleanest dude there
The Israeli government gives stipends to Charedim to do nothing? →

6 comments for “Mechitza guide of the Bay Area”