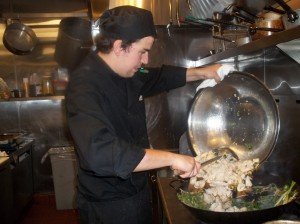 On December 27th 2009 I started a job which was to change my life. You see when I moved out here, I planned to work as a mashgiach for a short while (to me working as a mashgiach was a fallback excuse to take a long road trip job) I never thought it would turn into a career, I figured on getting a desk job in silicon valley doing something with blogging, I never thought I would be a professional cook.

When I moved to the Bay Area a year ago, I was in the midst of a loving relationship, but since being in the East was killing me we figured we could weather the distance, instead I fell in love with the west, she with her boss and though we have remained close friends – we have gone our separate ways, but she prepared me in many ways for the career I was about to embark on.

You see, around 6 months ago, the chef approached me and asked if I would like to learn to cook. By now I was pretty handy with a knife, could prep out almost everything in the kitchen and was into experimenting here and there, but I was kind of frightened of the frenzied pace of the “line”, it was fast, loud and hot, but I figured I could give it a try.

I am all about hashgacha prutus and I believe that God prepared me in many ways to become a professional cook. For the first time in my life I enjoy my job and look forward to working every day. The pay is crappy, much less than I have made in every other job since I graduated college, which is kind of pathetic because although I work the line, I am still paid a little more as mashgiach.

I never thought I would be a cook, it’s not a glamorous job, the hours are long and strange, cooks don’t have social lives, we work when everyone else is off and I have to turn my kitchen mouth off when talking to regular people, but it’s amazing work and I am learning loads and have been given the freedom to experiment with loads of things (I switch between grill, saute and pantry – to get a feel for the whole kitchen – I have also learned fish and some meat butchering)

Being a cook and living in the bay area is also kind of cool because everyone is into food. Not only have I become a slight foodie, I like good wine, coffee and interesting produce as well. I have begun to forage for exotic mushrooms in the woods I hike in and have decided to start making my own cheese, liquor and sourdough.

I haven’t spoken about this much just because this isn’t a food blog, but some of you have figured my path out because I have ceased to write about food because it’s become food takes on a much different meaning when you actually know how to make it – I’ll leave it at that.

← So you think you could be a lubavitcher?
Hazon: You know it’s crunchy when I’m the cleanest dude there →

39 comments for “The one year anniversary of becoming a cook”