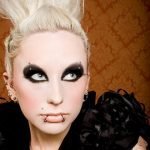 Usually the girl looks pretty hot at her wedding, I’ve noticed that no matter how ugly she is in real life, on her wedding day she magically looks gorgeous – radiant may be the right word, the only problem is the makeup, especially the trend in frum circles to go for the Gothic eye shadow.

Now I am a bit biased, I don’t like makeup, I hate the concept of makeup, the name of makeup seems fake in itself and almost all of the girls I have dated seriously felt exactly the same way – we makeup haters roll together. The thing is, at weddings, they load on too much makeup. I don’t think I have ever been to a wedding where the girl didn’t wear makeup, but I also have never been to a wedding where the makeup was tasteful.

Just because I don’t like makeup, doesn’t mean the stuff can’t be tasteful, a lot of girls will say that I cannot they are wearing it – which is great, then what the F is the point in hiding your natural beauty marks or whatever you needed makeup for? The problem is when makeup is distasteful and this is often the case at weddings.

I don’t know how it goes at non-religious weddings, but at frum weddings the makeup trend seems to be heavy on the eye shadow, so every girl I have ever seen get married, looks like she’s going gothic for her wedding day. Out of all the makeup nastiness, my biggest hatred is working on the eyes and the lipstick, you want to throw on some blush or cover up whatever  – but don’t touch the eyes – you should be proud of what God gave you, not have to cover it up and make it look like crap.

Now I wonder if any guy was ever standing at the chupah and repulsed by what the makeup artist did to his lovely bride. Has any guy demanded that she take off the gothic eye shadow? Or do they just want to get it over with so they can eat some sponge cake in the yichud room and make out all that bright lip gloss away.