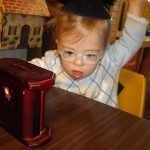 I would like to retell a story that I heard from Rabbi Levine of San Jose’s Congregation Am Echad:

An Israeli man had just finished collecting money in South Florida to marry off his daughter, he was on his way to Atlanta to continue collecting when he was pulled over for driving over the limit just north of the Florida-Georgia state line. Since he had an Israeli license he would have to see the judge, upon hearing the case the judge fined the man $175, he pulled out this thick wad of the money he had just collected and calmly counted out the money – when the judge saw that they had him arrested for drug trafficking.

Interstate 95 between Miami and Atlanta is known as prime drug trafficking country and it was pretty obvious that this foreign man had just been caught in the midst of some sort of operation, why else would he be carrying ten thousand dollars in cash. He was able to call the Rabbi of the community he just collected in and in turn the rabbi called the court to explain.

When the Rabbi was finished explaining the judge was flabbergasted, he just couldn’t believe how generous some people could be. “Let me get this straight, this man just shows up and people give him money?” We check out his cause to see he’s legit, but generally yes – the Rabbi explained. “I just don;t understand, regardless, this man shows up knows no one and people just give him money?” Yes and they put him up for the time he’s here and find him places to eat meals. The judge said that it was insane and that he had joined the wrong religion.

Orthodox Jews are really generous, so much so that we don’t think twice of hosting random strangers in our homes, feeding them, opening our wallets for them and giving them whatever assistance they may need – I’m continuously impressed with the high level of tzedakah, generosity and hachnasas orchim that is displayed by the frum community and I myself am proud to be a part of it.

Sure we have our shit and sure it;s fun to make fun of it, but I have to give credit where it’s due and when it comes to charity, it seems that everyone should throw the ultra orthodox on a pedestal. Tomche Shabbos, Friendship Circle, Hatzoloh, Orah and thousands of other organizations to help anyone who needs something – I was never exposed to gemachim until I lived in Monsey and I was amazed at the simple things that people would buy just so they could lend them to others in need.

They have gemachim for wedding gowns, chairs, bris pillows, breast pumps, linens, bicycles and children’s toys – the list is endless and many of these gemach’s are run by ordinary people with no extraordinary means. There are even wedding hall gemachs for people who can’t afford a wedding.

If you need something, I can pretty much guarantee that there is someone who has an organization within the frum community to support that need.