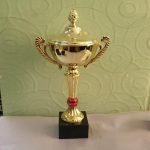 So I’m sitting in Oakland at some mighty cool folks for lunch this past shabbos and they start talking about this shul fund-raising event called the Man’s Cup and I simply don’t believe them. The Man’s Cup sounds mythical, imagine a bunch of grown married Jewish men competing in table hockey, foozball and paper football for a Cup (imagine the Stanley Cup – but for things that you haven’t played since high school, but a real completion with grown men) It;s crazy but it actually exists and I was shocked.

Now before I explain the absurdity and hilarity of this you have to understand something about Oakland, it is probably one of the most social and active communities I have ever been in. The Rabbi is amazing and it’s one of those places where everyone is cool, cool enough to have a teens lounge with a big screen HD TV and a Wii and motzoi shabbos trips to LA simply to get food (they also use these as fundraisers – you have to be tickets) , lots of food and be back Sunday night. I thought I was the only crazy guy willing to drive 800 miles for a slice of pizza.Oakland is also one of those communities that has stuff always going on at the shul, every night in fact and the crowd is exceedingly diverse and it has the largest membership of any orthodox shul in the area by far. They even have a weekly class called Torah in Television.

But enough about Oakland, let’s talk about The Man’s Cup. I’m sitting at lunch pondering the absurdity of grown men playing competitive table football for a trophy (the Rabbi of the shul won the first year they held the Man’s Cup in 2006) and they suddenly bring out The Cup, this hefty trophy made of gold cup mounted on wood that looked like they poured the type of cup they would pour out some kedem grape juice on the winner. The meals host won it twice, it was all very funny to me and everyone at the table was so serious about it.

I was actually kind of shocked that any shul, save for the one in San Jose could pull off such a sexist event, if someone in Berkeley merely proposed such a chauvinistic event – implying that women couldn’t compete with men in table hockey or Foosball I could almost guarantee a lawsuit from the ACLU, but it seems that Oakland is more laid back about their Bay Area liberal tilt and that out of all the communities in the Bay Area they seem to be diverse enough politically where they find blatantly sexist events like the Man’s Cup to be plain old funny like they were meant to be.

Now I wonder if any shul in New York is cool enough to have such a weird event or if you know of other interesting and wacky fundraisers like this one.